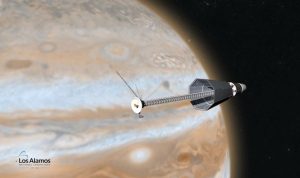 Scientists at NASA and Los Alamos National Laboratory have tested a prototype of a nuclear reactor engine that may be used for future deep space missions.

“A small, simple, lightweight fission power system could lead to a new and enhanced capability for space science and exploration,” said Los Alamos project lead Patrick McClure. “We hope that this proof of concept will soon move us from the old frontier of Nevada to the new frontier of outer space.” 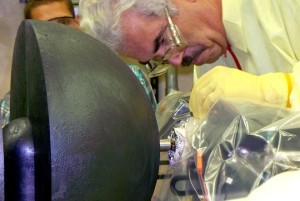 The prototype represents the first test of a nuclear engine for spacecraft propulsion in the U.S. since 1965. The engine consists of a small nuclear source and a single Stirling engine, an engine design invented in the 19th century that uses hot pressurized gas to push a piston. The prototype produced about 24 watts of power, which is still very small compared to a deep space mission’s requirement for about 600-700 watts of power; hence some development is necessary before this engine is ready to be used in any spacecraft.

Deep space missions to date have primarily used plutonium-238 as a nuclear source. The plutonium-238 decays, releasing thermal energy that is converted into power. Plutonium-238 is more difficult to obtain than uranium isotopes, providing the nuclear Stirling engine with a relatively abundant energy source

Benefits of this engine seem to be promising; such a propulsion system would enable exploration of far planets like Saturn, Neptune, and their moons even when solar energy falls to a trickle.