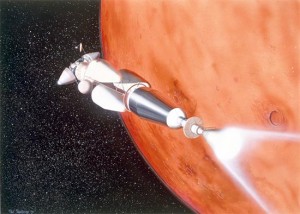 According to press agency RIA Novosti, Russia is developing a Megawatt-class nuclear propulsion system for long-range manned spacecraft. “At present we are testing several types of fuel,” said Denis Kovalevich, Skolkovo Foundation’s Nuclear Cluster head, “the engine is expected to be ready by 2017.”

The source reports a government allocation of 500 million rubles ($16.7 million) in 2010 to start a project of a nuclear powered spacecraft, with a projected total investment of about 17 billion rubles (over $580 million) by 2019.

The engine will be used for interplanetary manned missions targeted to the Moon and Mars. A recently leaked document from Russian space agency drafted an ambitious plan for planetary exploration, both manned and unmanned.

Nuclear power is generally considered a promising technology for interplanetary exploration, especially beyond Earth’s orbit, where solar power gets weak. NASA has been trying to promote nuclear propulsion several times, including a project in 2003, but funding was eventually cut down.

In the video below, a review of project Orion, the most ambitious nuclear propulsion project developed by US.