The dawn of the age of discovery was launched when brave mariners first trusted their lives to Norse long ships, Chinese junks, and Spanish caravels to sail upon unknown seas.  As overseas colonies flourished more refined vessels offered their passengers greater speed, comfort, safety, and reliability.  By the early 20th century, dirigibles and the first airplanes allowed travelers to safely soar high across those broad seas.

During the first space age, the early pioneers were compelled to risk their lives on unpredictable chemical powered rocket stages stacked precariously one atop another or in spindly rocket planes dropped from beneath the wings of lumbering bombers.  These first rocket-powered vehicles with improved safety and reliability were eventually able to transport humans to the Moon and back nine times and today routinely shuttle astronauts into low Earth orbit. Just as the mighty Saturn V allowed humans to touch the surface of the Moon, so the SLS or the SpaceX Falcon Heavy may one day enable the first humans to leave footprints upon the dusty deserts of Mars. 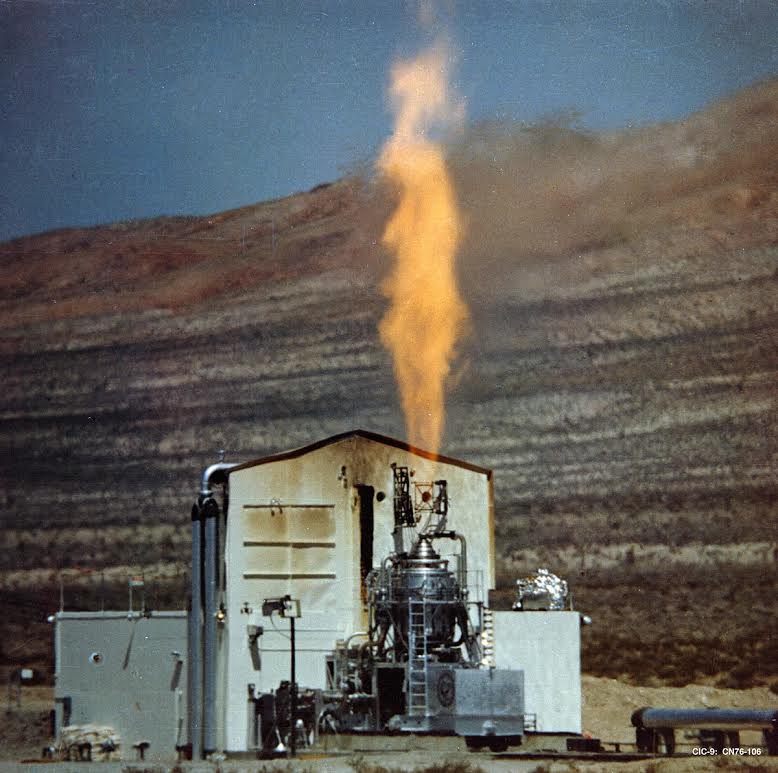 The Rover Kiwi-A full power test conducted at Jackass Flats located on the Nevada Test Site on July 1, 1959. The hydrogen exhaust plume that blurs out the mountains in the background is mostly invisible and dwarfs the visible central column (Credits: NASA).

The Limits of Chemical Fuels

The question now before us is how do we make the transportation of large numbers of humans to destinations throughout the solar system economical, safe, reliable, and completely routine?  To answer that question we must ponder the implications of Tsiolkovsky’s famous rocket equation.

Under the constraints of that equation, the ultimate limit for any rocket engine design is the maximum amount of power that can be generated without melting the materials out of which the engine is made. This power limit defines the maximum amount of energy contained in a fuel that can be converted into useful kinetic energy to power a rocket; it is expressed in the limits of exhaust velocity, specific impulse, and thrust that are achievable.  Neglecting atmospheric drag and the normal thermodynamic constraints on efficiency, the rocket equation tells us that we are dealing with just three variables:

Once we subtract out the mass of the launch vehicle with its tanks and plumbing we discover that the mighty Saturn V only delivered a payload mass fraction of about 4%, or 120 metric tons, to low orbit. In contrast, the following list serves to illustrate the order-of-magnitude differences that nuclear energy provides for a given unit of chemical energy:

Ever since the discovery of radioactivity in uranium by Henri Becquerel in 1896 and the discovery of radium by Marie Curie in 1898, it was clear that there was a tremendous amount of energy locked up inside the atomic nucleus. When a 26-year old Berne patent office clerk named Albert Einstein published his Special Theory of Relativity in 1905 he defined for the first time just how much energy that was using his famous equation: mass multiplied by the speed of light squared. No one at the time, however, had any idea how that vast amount of latent energy might be extracted to do useful work. In his 1914 novel The World Set Free, H.G. Wells speculated about the eventual development of an atomic bomb and in 1921 Edward E. “Doc” Smith wrote a novel entitled The Skylark of Space, playfully depicting interstellar adventures on an atomic powered spaceship that was serialized in the August, September and October 1928 issues of Amazing Stories.  Not until the Christmas holiday of 1939 did Lise Meitner who was then living in exile in Sweden, recognize that experimental results obtained by her former colleagues in Berlin had resulted in the successful splitting of the atomic nucleus.  As a result of that back-of-an-envelope insight, mankind became heir to one of the most closely guarded secrets of the cosmos.

– In the video below, a documentary about NASA’s NERVA Program

After the Manhattan Project birthed the first atomic reactor, the first uranium bomb, and the first plutonium bomb, the same engineers went on to design a variety of undersea and outer space nuclear propulsion systems during the 1950s.  Among these were the first solid core nuclear thermal rocket engines under Project Rover.  The engines were mounted upside down on their test stands at the Nevada test site with the rocket plume firing upward into the atmosphere.  Aerojet General and Westinghouse Electric developed and ground tested the final engine design at the Nevada test site in 1969 under the NERVA (Nuclear Energy for Rocket Vehicle Applications) contract through NASA’s Space Nuclear Propulsion Office. This NERVA-1 engine was designed to power the first NASA manned Mars mission that was then projected to launch in 1981. Unfortunately, President Nixon canceled the first Rocket in Flight Test (RIFT) for NERVA in 1973, the year after he also canceled the last three manned Apollo lunar missions. (Due to concern by some NASA engineers about possible radiation leakage the RIFT test flights were to be conducted using a modified Saturn V first stage in order to lift the NERVA-1 stage above the thickest part of the atmosphere before activating the nuclear engine. There is some question as to whether this precaution is really necessary since all of the ground tests were already open atmospheric tests.) 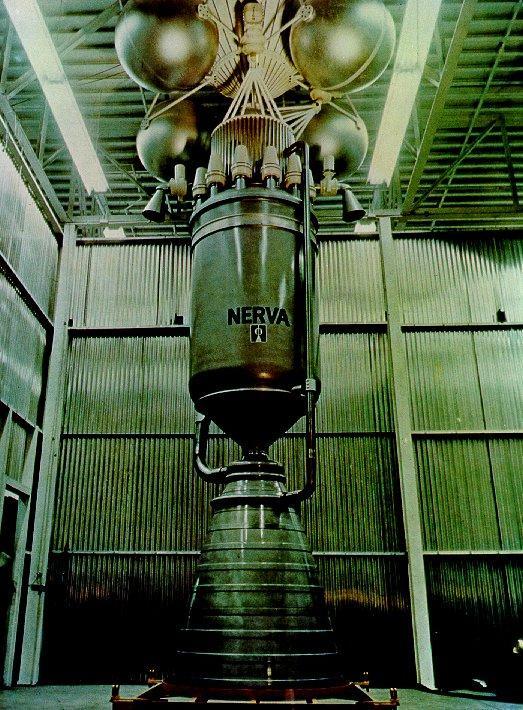 Full scale mockup of the final design NERVA-1 engine circa 1970 that was designed to deliver 75,000 pounds of thrust at 1,500 MW, 10 hours of running lifetime at full power and 60 recycles (full starts and stops) and a specific impulse of 826 seconds (Credits: NASA).

The Future of Nuclear

A new generation of young nuclear and aerospace engineers is today exploring nuclear propulsion as we prepare to embark upon the second space age in which large numbers of humans will begin to establish permanent colonies throughout the solar system.  Solar energy will undoubtedly play a role as a valuable power source in colonies located near Earth’s orbit but solar energy becomes ineffective beyond Martian orbit.  Because the solar flux drops off as the square of the distance from the Sun only reliable, energy-dense nuclear power can enable permanent human colonies to thrive among the outer planets of our solar system and beyond.  Enormous amounts of energy will be required to power space colony life support systems, resource extraction operations on planets and asteroids, and off-planet 3-D printing industries.  The universe runs on the nuclear emissions of stars, and if we are to become an expanding and prosperous interplanetary species, we must generate our own nuclear sources. The high energy density of nuclear fission can today fully enable our first off-planet settlements until nuclear fusion, and perhaps even more exotic drives, one day become available to open the road to the stars. In 1939, Lise Meitner lifted the veil that had long concealed the secret of atomic energy from human consciousness. In so doing she provided us the means to achieve the dream expressed by Konstantin Tsiolkovsky in 1903 when he wrote that “the Earth is the cradle of mankind, but man cannot live in the cradle forever.”

A founding partner at Meraki Enterprises LLC, Willis Shirk is a professional historian, educational consultant and freelance writer specializing in the history of science, engineering and mathematics in the 20th century. He is currently working on a book on the history of various nuclear space propulsion system concepts.