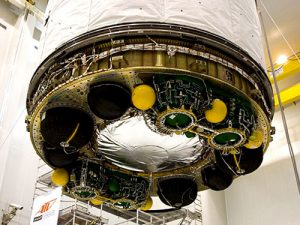 A new shipment of water fromTurin, Italy, is already on the way to quench the thirst of astronauts and cosmonauts on the International Space Station (ISS). Since 2008 the SMAT (Metropolitan Water Company Turin) is  supplying the space station with drinking water, truly two different kind of water for the US and Russian segment.  Both segments require a very stable water, able to maintain its properties for months in zero gravity, but while the Americans prefer little mineralized water,  treated with iodine salts, the Russians prefer heavier waters, with more minerals and treated with silver salts.  For the Americans, the SMAT selected the very light water from Pian della Mussa, coming down from the valleys of Lanzo. For the Russians, the water comes from wells located in the region of Collegno because of the mineral content. A sampling of these waters was sent to NASA, which certified it after thorough checks.

But why two different waters? Simply because the Americans and Russians could not agree on a common disinfecting agent standard for potable water! Electrolytic ally-dissolved silver was used as a water disinfecting agent for the drinking water supplies of the Russian Mir orbital station. Iodine instead by Americans on the Shuttle. Although iodine is an effective biocide, some humans are metabolically sensitive to it. Consequently, iodine removal hardware was already developed and used in the Shuttle galley. Removal of the iodine present in the ISS supply water is accomplished using the same hardware as used with the Shuttle galley. This hardware, the Activated Carbon/Ion Exchange (ACTEX) filter, has successfully proven its ability to deiodinate U.S. potable water with an iodine concentration of 6.0 mg/L down to less than 0.2 mg/L.

The next load of about 400 liters is currently on the road. Produced in three weeks of work, the “space-water” was fed into three special steel tanks carriers, delivered on September 27, 2011 to the port of Rotterdam. The cargo will be shipped by boat to the European spaceport Kourou, French Guyana, where it will be launched on board ATV/Ariane 5, early next year.

In the video, below, astronaut Greg Olsen drinking water on the ISS.