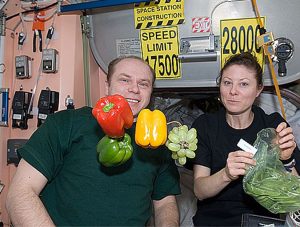 Cosmonaut Oleg Kotov and NASA astronaut Tracy Caldwell Dyson open a delivery of fresh fruit and vegetables on the International Space Station in May, 2010. (Credits: NASA).

With the United States Thanksgiving on Thursday, November 24, a food-centric national holiday, focus has centered recently on the quality of space food. A new study, published in the Journal of Food Science, explores the long-term stability of foods packaged for use in Space. Stability of five years or more would be required for a long duration mission such as a crewed flight to Mars. “We don’t have refrigerators and freezers for food and so all of our food has to be shelf-stable,” said Vickie Kloeris, NASA’s manager for the space station’s food system. “We process it so it’s either going to be thermostabilized like a canned product in a pouch, or it’s going to be freeze-dried,” he said. The study showed that only seven items — all meats — would be edible after five years, said NASA food scientist Michele Perchonok, with the Johnson Space Center in Houston.“You can’t build a food system on seven items,” Perchonok said at the American Astronautical Society annual conference in Houston this month.

Therefore researchers are working on methods to allow space travelers to grow their own food. Purdue University’s Cary Mitchel and Gioia Massa have found that sweet potato plants are a prime candidate for space-based horticulture. The plants are able to grow under a variety of temperature and lighting conditions and are not sensitive to circadian or seasonal rythms. The researchers have reported their results in the journal Advances for Space Research.
Meanwhile, NASA has been utilizing an unusual resource to expand space food variety. Under the HUNCH program, high school students from Pennsylvania have been collaborating with MIT scientists to identify methods for astronauts to produce freshly prepared foods such as scrmbled eggs and baked goods. Students are also working on development of a food mixer that oculd be utilized in Space.
“The idea of being able to give astronauts a way to make scrambled eggs fresh is huge,” said the students’ teacher Mohammed Bakr according to MetroWest Daily News. “(NASA engineers) are very excited.”
In the video below, ISS Commander Dan Burbank displays the ISS crew’s Thanksgiving dinner.