For several reasons eating in space is not an experience for gourmets. Recent research conducted by four high school students from North Carolina aims at making space dining more enjoyable. Their special spicy “Stellar Strips” can add more taste to astronauts’ food without creating a messy situation in the microgravity environment. 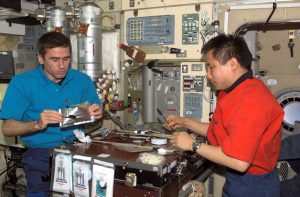 “In a microgravity environment, you can’t just use a salt and pepper shaker,” said Myra Halpin, a chemistry and research instructor at the North Carolina School of Science and Mathematics, in Durham. “One astronaut had written about how getting hot sauce on food was a challenge — he described spinning himself around to get the hot sauce out of the bottle.” And not only that;  among the negative side effects of long-duration space flight some astronauts reported also blunting of taste sensation . There are several explanations. From the physiological point of view, the microgravity related build up of fluid in the sinuses changes the taste in a similar way as holding one’s nose while eating. Also the long periods for which the food is stored lead to its degradation.

The Stellar Strips can solve this problem using a technology similar to breath fresheners that melt in one’s mouth. The rice starch strips can hold not only flavors but also vital nutrients such as vitamin C or calcium. In the space environment, this capability can contribute to fighting bone loss. Moreover, a package of the Stellar Strips the size of a ream of paper could give astronauts enough flavor choices for three meals a day for over 15 years. The idea was created as a part of a Spirit of Innovation Challenge competition organized by the Conrad Foundation and supported by NASA. The concept was introduced at the end of March at NASA Ames Research Center. If proved safe and suitable for space flight, the “Stellar Strips” can make it to orbit by 2015. Even on Earth the self melting rice strips can help people suffering from reduced sense of taste, such as the elderly and patients undergoing chemotherapy for cancer or taking beta blockers for high blood pressure. See more on food in space in the following video: [youtube http://www.youtube.com/watch?v=l14L1pcp9vY]