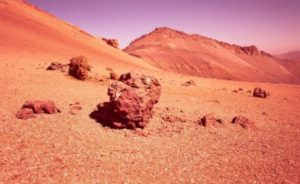 For long duration space exploration missions on the Moon and Mars, growing food on site will be advantageous, saving overall mass to be carried for the space flight. The question is: Can we grow plants on Moon and Mars like we do here on Earth? Ecologist Wieger Wamelink at Alterra Wageningen UR plans to find out.

Wamelink has proposed to study feasibility of plant growth in lunar soil first. “Mars is still a long way off,” said Wieger Wamelink. “But the Moon is closer, so it would be more realistic to establish a colony there. What’s more, we already know the mineral composition of the soil on the Moon, and of Moon dust. So what I’m aiming to find out now is whether plants will grow in Moon substrate, or whether certain essential elements are lacking. This has never been done before. We are gradually discovering more about Mars, which is why the planet has been included in this research.”

Most previous work relating to growing plants off-planet has been focused on creating artificial growing environments for plants to be grown on space stations; use of soil as a growing medium has not received much attention. One previous study conducted by ESA in 2008 concluded that plants such as marigolds can be grown in crushed rock, which closely resembles lunar soil.

With the help of Alterra’s database, Wamelink will analyze plants based on 25 abiotic preconditions per species, which will determine the plant’s survivability. The result would provide theoretical evidence for capability of growing in lunar dust or Martian soil.

“We will then allow certain species of wild plants and agricultural crops to germinate in pots of artificial Moon and Martian soil supplied by NASA. The growth of these plants will be compared with that of the same species in ordinary soil from the Earth. Preconditions relating to heavy metals and minerals will be derived from our findings. Our research is based on the premise that an atmosphere will be available to the colony, perhaps in domes or buildings. We are also assuming the presence of water, either from the Moon or Mars or transported from Earth. The plants would produce oxygen and recycle carbon dioxide, ultimately creating a kind of ecosystem”, said Wieger Wamelink.