“It’s got that sizzle going—I love it,” said Dr. Sian Proctor as she fries rice and turkey Spam inside a two-story geodesic dome on an abandoned quarry in Muana Loa, Hawaii.

She is one of six participants living in the Hawaii Space Exploration Analog and Simulation (HI-SEAS) habitat, researching food preparation strategies for long-term space exploration on Mars or the Moon. The study is led by Cornell University and the University of Hawaii at Manoa and is funded by grants from the NASA Human Research Program. 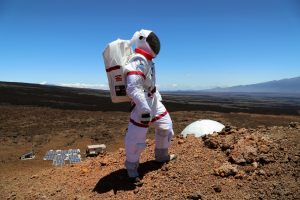 HI-SEAS researcher Dr. Oleg Abramov, pictured above, and the other crew members suit up for field trips outside the dome, pictured to the right (Credits: Angelo Vermeulen).

The crew has already spent more than 80 days inside the 92 m2 structure, and they deal on a daily basis with a 20-minute real-time communication lag, restricted water use, and simulated space suits they must don any time they step outside the dome. Hawaii may be millions of kilometers away from Mars, but the HI-SEAS crew is doing their best to assume the closest stretch of ocean is, in fact, a black expanse of deep space strewn with stars. And that means no fresh fish.

Instead, dried shrimp and canned anchovies, salmon and tuna will have to do. The selection pales in comparison to the real world, but these six researchers at least have an advantage over the astronauts on the International Space Station: creative license. By blending together shelf-stable ingredients to make meals instead of relying solely on just-add-water meals, the HI-SEAS crew is attempting to fend off “menu fatigue,” a phenomenon describing the weight loss of astronauts who lose their desire to eat the same ready-to-go meals for weeks on end.

The study requires the participants to cook their own meals half of the time and for the other half to eat pre-prepared meals like creamy wild rice soup or lasagna with meat sauce. It then measures the participants’ consumption patterns, moods, sensory functions like taste and smell, and overall nutrition. It also investigates how much of the so-called menu fatigue relates to the astronaut’s change in sense of smell and, therefore, taste. The participants must complete nine surveys a day in addition to detailing their meals down to the ingredients’ mass in grams.

“We’re comparing two different systems in terms of the resources used—like energy, time and equipment—and the outcome, like satisfaction and nutrition,” said Dr. Kim Binsted, the principal investigator at HI-SEAS. “We’re going to provide NASA with a formula that compares these two systems.”

The crew members—composed of a few amateur or hobbyist cooks but no professionals—use an on-board cookbook but also make recipes submitted by the public during an open recipe contest prior to the 2013 mission. Some of these recipes include bean soup with herb biscuits, submitted by Joan Peterson; dark matter cake, submitted by Aquilla Elfindale; Martian skin, submitted by Brighton Grow; and, of course, Proctor’s Spam fried rice, submitted by A. Kirk McCarty.

“The food study is going really well,” Binsted said. “The crew has gotten really creative with the ingredients, and it’s certainly serving an important social function.” 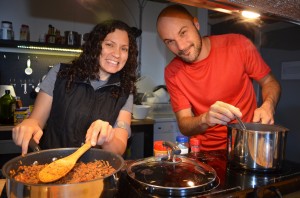 The social function of the HI-SEAS dinners are an integral element to psychological well-being during the study period. “As a commander I learned that it’s crucial to keep people talking and keep the group (physically and emotionally) together,” said crew commander Angelo Vermeulen, pictured right of crew member Dr. Yajaira Sierra-Sastre. “The worst that can happen is everyone working in their own little room all day long” (Credits: Dr. Sian Proctor).

Creativity, improvisation and experimentation are what crew commander Dr. Angelo Vermeulen likes best about the food study. “The sharing and discussing of food is absolutely crucial,” he said. “Every single meal gets heavily discussed by us. It’s actually a perfect tool to increase crew cohesion.”

Crew cohesion will be paramount to future Mars missions, as a mission could require the astronauts to be isolated from family, friends, and other human contact for three years. If cooking improves the psychological and social wellbeing of the crew members, it would likely contribute to improved drive and, essentially, improved research.

“Food is one of the very few things the crew members have that’s familiar,” said Dr. Grace Douglas, a project lead at the Johnson Space Center in Houston for NASA’s Advanced Food Technology Project. “If you think about how important food is to our everyday lives and our comfort, it’s important to try and provide the crew with the best food system and most optimal nutrition possible on a long duration mission.” 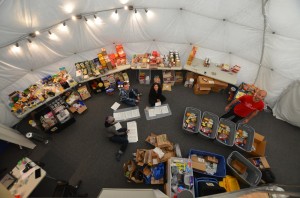 The HI-SEAS crew may have a limited selection of foods compared to the grocery store, but the inventory is large and varied compared to the choices current astronauts have (Credits: Dr. Sian Proctor).

Many of the ingredients at HI-SEAS are not a far stretch from a college student’s dorm cabinet: crackers, chips, and hot sauce. Others are more refined: chorizo, dried lemon peel and currants, warranting the question: are these really necessary for a deep space mission? Another question is whether the benefit of shuttling these ingredients on a mission is worth any mass and volume requirements beyond what is currently used to feed astronauts.

Some people believe NASA should move away from pre-packaged foods entirely–both shelf-stable ingredients and ready-to-eat meals–and instead look at a system that can be maintained and regenerated on-location.

“I do not believe that pre-packaged foods are a cost effective way of spending NASA dollars,” said Daniel Ayer, a commenter on a Science Friday HI-SEAS radio feature story who works in pharmaceutical manufacturing. “The energy requirements for moving stuff into space work out to cost about $10,000 per pound. Therefore, shuttling non-essential items to and from space is cost prohibitive.”

But the idea, stressed Binsted, is to figure out the most efficient selection of ingredients in terms of characteristics like cost, mass, nutrition, and—of course—taste. At the end of the study, the team should have a pretty good grasp of which ingredients to stock for a real Mars mission and which ones to leave at home. That means only taking what’s necessary—but having some fun along the way.

“The cost per pound to get food to space is so high that the cost of the actual food is pretty much irrelevant,” Binsted said. “With all that in mind, I’m a big fan of truffle oil. It weighs the same as canola.”

According to Vermeulen, spices, herbs, and hot sauce rank top on his ideal list of essentials, but also “comfort food” like Nutella, peanut butter, and margarine. He also added, “The dehydrated and freeze-dried vegetables have been a success—I would definitely take those on board, as well as enough ingredients rich in fiber.”

That said, he does miss fresh vegetables.

Dr. Binsted pointed out that the HI-SEAS food study is just one of many projects aimed at improving food in space. Douglas’ research at the Johnson Space Center on bioregeneration, for example, could bring Vermeulen his currently-craved veggies.

“A bioregenerative system would have much higher crew time requirements than prepackaged food. It takes a lot of time to grow, maintain and harvest the crops,” said Douglas, noting that even a robotic system employed to do the work would still require human input at some point.

“But when you have fresh crops growing,” she continued, “there is a huge benefit nutrition-wise. You also get a psychological benefit where crew members can grow some green, leafy plants. There is more color and variety and the crew could have more control over their meals.”

What NASA will use in the end to inform the real Mars mission, Binsted said, is a combination of several studies. “These are all trade studies,” she said. “We are just giving them [NASA] the numbers they need to figure out what the balance will be.”

As for the HI-SEAS study, the crew has about a month left at the dome.

“An experience like this makes you more humble in a way—less demanding,” said Vermeulen. “This study has further increased my appreciation for fresh food. I don’t think I will ever look at food the same way again.”