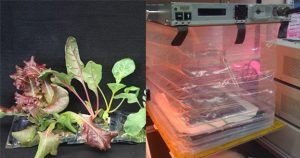 U.S. astronauts working and living aboard the International Space Station might soon have their own fresh vegetables grown in space. A newly developed vegetable production system, called VEGGIE, is planned to be delivered aboard NASA’s third Commercial Resupply Services mission with the SpaceX’s Dragon capsule in 2013. For the astronauts living 200 miles above Earth’s surface, it would mean having access to fresh food and not having to wait for next resupply ship to get fresh produce.

“Our hope is that even though VEGGIE is not a highly complex plant growth apparatus, it will allow the crew to rapidly grow vegetables using a fairly simple nutrient and water delivery approach,” said Howard Levine, Ph.D. and chief scientist of NASA’s Kennedy Space Center International Space Station Research Office.

According to NASA, the VEGGIE system weighs about 7 kg (15 pounds) , takes up the same amount of space of a microwave oven and requires only about 115 watts to operate. This system was built by Orbital Technologies Corporation (ORBITEC) and will address the difficulties of gardening in microgravity.  The light source for the plants is an energy efficient LED system that is capable of providing full spectrum light.  “We really only need the red and the blue LEDs for good photosynthesis, but we have the option of turning the green LEDs on, which will make the overall light look white, making the plants look green rather than purple,” Gioia Massa, a postdoctoral fellow in the Surface Systems Group of Kennedy’s Engineering Directorate said. The soil, along with fertilizer, will be placed in rooting pillows made of Teflon-coated Kevlar and Nomex.  A water reservoir will be located beneath the pillows to add moisture to the root mat. The seeds will be either planted in the pillows on Earth or inserted later by astronauts in space. The space gardeners will start to growing crops like lettuce, radish , chinese cabbage, and bok choy as these types of plants are ready to harvest in a couple of days. Tomatoes and corn, for example, require too much time and space.

This project seems quite exciting in many ways: on the one hand, the availability of fresh vegetables will benefit the astronauts, on the other hand, this project is the starting point for a lot of interesting experiments regarding plants and their behaviour in microgravity.  NASA released a Research Announcement where researchers may propose a project, which must also involve students in K-12 classrooms and show NASA how these experiments would teach the students about science, technology, math, and engineering.

Plant development in space has been under research almost since the very first space flight. There are now hundreds of seeds that have flown in orbit to ascertain the effects of the environment – particularly radiation – on their ability to germinate. Use of plants as part of a self-sustaining habitat have long been a subject of research for space agencies and planetary colonization enthusiasts in search of closed system life support. A zucchini plant even became famous in 2012 when astroanut Don Pettit personified the personal experiment in a zucchini diary. What these initiatives have not achieved, that VEGGIES aims to do, is provide a fast growing sustainable source of edible produce for spacefarers on short duration missions.

Even if VEGGIE will not provide the solution for fresh produce at the ISS in the short term, a successful program is a step in the right direction for more gardening in the microgravity environment.
[youtube http://www.youtube.com/watch?v=m6o5LTl6GJw?rel=0&w=640&h=480]