“The Cosmonaut” is a film produced by the Riot Cinema Collective, a fusion of science fantasy and history inspired by the legends of the lost Soviet cosmonauts. The film is set between from 1967 and 1976, and follows the life of Stas, Andrei, and Yulia in the recently built Star City. The main characters are witnesses to the successes and failures of the Soviet space program, and are frustrated by political intrigues and power struggles prevalent at the time.

“The Cosmonaut” proposed a new model of fi­nancing production and distribution, making full use of social media. The film has raised €400,000 from over 4,500 people with a crowdfunding campaign and generated a huge community of fans well before the premiere, which took place in May 2013. The Cosmonaut is also a transmedia project, meaning it is more than just a film, it is a story-universe that expands the experience of the film through bonus texts, photos, clips, and books. The film is distributed freely on the Internet under a creative commons license.

How did you have the idea for “The Cosmonaut” and what were your most important influences in making this movie?

It all started with a fake project developed by Spanish photographer Joan Fontcuberta. It was about lost cosmonauts and I started to discover a whole world of stories and black legends about secret accidents and cosmonauts lost in space, never being able to return to Earth or dying during reentry. The idea of a human being, alone, 400,000 km away from home, knowing he is going to die, just blew my mind. I wrote many stories with cosmonauts in them, began to read Ballard and a bunch of historic books, ending up falling in love with the space race, especially the Soviet part, and decided to tell my story in that period, with all those incredible achievements and conspiracies and epic stories. I’ve been inspired by the hard arm of science fiction like Ballard, Asimov, Lem, and by films too, like Solaris or Stalker, but also by directors that have little to do with space, like Wong Kar Wai or Terence Malick. 4 years, 130 different locations, 3 countries, hundreds of professionals involved, everything allowed by almost 5000 people contributing via a crowdfunding campaign. Can you tell us: how did you make it possible? What were the major difficulties you encountered in making “The Cosmonaut”?

Phew, so little space to write about all the things we have been going through! It has been like a roller coaster. When you read all those stories about difficult shootings in films like Fitzcarraldo, Apocalypse Now, Blade Runner, they sound like fun. It is not so much when hell breaks loose on you but, hey, it is always nice to have enough stories to write one of those books by yourself.

“The Cosmonaut” was a leap of faith. Since we innovated so much, not only in the funding and distribution part, but also on the narrative part, breaking the story world in many pieces, (the 34 webepisodes, the film, the book, the diaries of the cosmonaut, the Facebook fiction etc.), it has been a very difficult project to put together. However, “The Cosmonaut,” in the end, is an epic story. All the things that happened between the moment I read Biskind’s “Easy riders, ranging bulls” five or six years ago and now are an epic tale of wild indie dreams, excitement, huge loads of work, crazy things, and tons of luck.

Behind “The Cosmonaut” there is one of the most amazing creative teams that any film could have dreamt about. Besides my beloved partners, Bruno and Carola, with whom I built our entire project and our company, there are also amazing directors of photography, incredible and generous British actors, crazy skilled editing assistants, amazing designers, and a lot of very special brains put together to get the film to its highest possible quality.

That is the only reason for the film to have succeeded. That and that we never took a no for an answer. 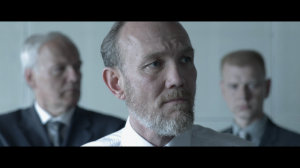 Nikolai Petrovich Kamanin, head of cosmonaut training in Soviet space program from 1960 to 1971, portrayed by Guy Williams (Credits: The Cosmonaut).

Crowdfunding campaigns are now also used to finance actual space projects. For example, Planetary Resources would like to finance ARKYD 100, an asteroid-hunter telescope and SHIPinSPACE is seeking money to continue the study of a new suborbital plane. Do you think that, in the future, crowdfunding will replace the usual way of getting money for projects?

I am not an evangelist of crowdfunding, on the contrary, I do believe blindfolded in crowdsourcing. The worst part is that is exhausting. It consumes a lot of time to find money unless you are Veronica Mars’ producer and you are able to raise 5 million in a week. Then you need to produce the merchandise you are giving in return, ship it over, and it is challenging. In our case, it was even more difficult since we have never been paid from production money and we worked 8 hours a day on “The Cosmonaut” and then another six on advertising to pay the rent.  Crowdfunding is a great tool and it will fund many projects in the future. Will it be the only option? I do not think so. A moment of the shooting preparation in Latvia (Credits: Daniel Torello).

“Back then, there was true love for space,” says the character of Giovanni Battista Judica-Cordiglia just at the beginning of the movie. I am sure that many space professionals would agree with that phrase, especially when they struggle to get funding or media attention for milestone missions. Is the true love for space really lost?

I think it has been lost because in the fifties and sixties it was all about discovery, which is something human beings are inclined to. We love to learn about new things and have that feeling of discovery. However, when the Moon was conquered, that feeling vanished.  The reasons to go to the Moon back then were not scientific or technological, although it served those purposes too. It was about beating the adversary and making a statement. That is why so many millions were put into the efforts. It was more of a propaganda stunt. When that ended, the next step was not Mars but just a lot of pretty intriguing scientific and technological stuff, interesting only for scientists and technological companies. It was not about human beings conquering the cosmos anymore, and I think that is why people got bored about space. We need to turn it into a human story again.

The movie suggests there has been significant historical research. Did you have some kind of consultancy when you showed the everyday life in Star City or when you choose the design of the Kolibri rocket and capsule?

I read a ton of books. I also visited Star City three times before making the film and talked to some cosmonauts and people related to space. Many of the stories they told me are in the film. Many details I read or saw by myself. However, I have not had a single consultant. I just asked around, asked for some help sometimes on Twitter to space lovers and so on.

The UR700 in the film was inspired by the original designs of Chelomei, but modified, so we called it UR701, like it was an evolution made by Andrei. The Kolibri capsule was one of the few things that we have decided to not be historically accurate with and it is nothing like the original LK700 module. We made a design that might have existed but it was inspired more in science fiction models from the sixties than in something made by Chelomei or other designer. Stas’ alone in the Kolibri capsule. The model for the capsule was inspired by science fiction model from the sixties (Credits: Miki Auvila).

“Isolation is overwhelming,” says the character Stas, alone in the Kolibri capsule between Moon and Earth. Do you think that, in the end, he regretted his dream to become an astronaut?

There is a moment at the end of the film where Andrei says he has had a dream where he asked Stas if it was worth it to have lost Yulia to walk on the Moon, and he dreams about Stas saying to him that it was not, but that, for just a fraction of a second, he felt alive.

I think that is the answer Stas would have given and what men and women that went to space and decided to put their lives under such great risks felt too: it is just that micro second, when you feel something no other human beings are going to ever feel. There is this great book, Moon Dust, interviewing the remaining men that had travelled to the Moon, and all of them have more or less the same feeling.

“Space is a bizarre place, there is so much to see down here,” says the character of Yulia. What is Space for you?

It is indeed a bizarre place. A wonderful one, but so away from what being human is. Like a Volcano, a cliff, or an abyss, it is something that is not made to host life, and I think that is precisely what makes it so fascinating. It is, again, that need of discovery, of adventure. It is knowing we can challenge it, look it in the eye and say: Here we are. We are humans, but here we are.

“The Cosmonaut” is more than a movie, it is more an experience, with many bonus materials and a growing community and I think it is keeping you busy even now that the movie is completed. What are your next projects? Are you planning to stay on “space” subjects?

I will need to stay working on “The Cosmonaut” for a few months still, of course. There is a lot more to do yet. However, I have new projects in mind and I will start developing them little by little. I have a few films and transmedia projects in my head but none of them related to space. I think I need a rest for a while, but maybe someday.

Cosmonaut is out now, and is free to watch.

Below, trailer for the movie, Cosmonaut: