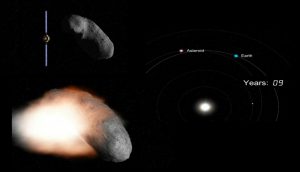 The B612 Foundation has proposed a deflection campaign procedure to prevent asteroidal impacts with Earth. (Credits: Digital Space).

The B612 Foundation is an organization dedicated to research early detection and deflection capabilities for the avoidance of asteroid impact on the earth’s surface. B612 has identified a multistep procedure, which, given sufficient advanced warning, could deflect an asteroid to a non-hazardous trajectory.

B612 distinguishes impacts hazards as either direct impacts or keyhole impacts. Direct impacts are asteroids whose current orbital path, without gravitational influence, will eventually bring the asteroid into a collision pathway with Earth. A keyhole impact results from an asteroid’s orbital pathway being gravitationally modified as it passes through a fairly narrow (on the order of a few kilometers) area of space. If the asteroid were to avoid this narrow “keyhole,” it’s trajectory would never come to intersect with Earth’s.

The video below illustrates the deflection campaign progression for the case of a direct impact asteroid. First, a spacecraft would be dispatched to the vicinity of the asteroid to carefully monitor it’s orbit for several days. With precise details on the asteroid’s trajectory, a final determination of the collision probability could be made. For a high probability of direct impact, a robust deflector would be applied such as a kinetic impactor (illustrated here) or a nuclear explosion.  The spacecraft would then monitor the asteroid’s new trajectory for several days to determine whether the danger has been averted. In some cases, this robust deflector may place the asteroid on a keyhole impact trajectory. In such an event, a more precise deflection would be applied via gravity tractor. To perform a gravity tractor maneuver, the surveillance spacecraft would hover near the asteroid in a state of constant thrust. The asteroid’s orbit would be gravitationally shifted by the  new two-body center of mass just enough to avoid the keyhole region. After the gravity tractor maneuver is complete, the spacecraft can once more monitor the new trajectory to ensure the asteroid would no longer pose a threat to earth.
[youtube http://www.youtube.com/watch?v=7URYVlFnvVc]