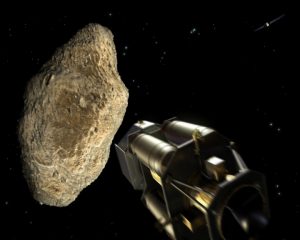 An article on Space.com highlights two new studies for mission to deflect away asteroids in collision course with Earth. A Chinese study proposes using a spacecraft propelled by by solar sails. The other plan is a European Space Agency mission called Don Quijote, which would crash a spacecraft into an asteroid in an attempt to deflect it, while a second spacecraft would orbit the asteroid to measure its behavior.

A possible target is the asteroid known as Apophis, named after the Egyptian god of darkness because of fears that it might crash into Earth. Rsearchers noted that giving Apophis a tiny shove at a key moment in 2029 would help ensure that it would not approach Earth in 2036, the year that it is forecasted to come near.