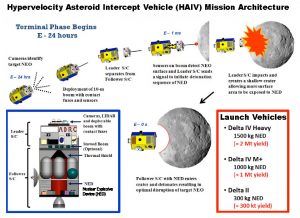 Professor Bong Wie, Director of ADRC, has recently been granted a $100K award from the NIAC program to continue development of HAIV into Phase II. The proposal, entitled “Optimal Dispersion of Near-Earth Objects,” is one of  30 proposals selected for funding under the NIAC program.

The proposed HAIV system consists of two spacecrafts following each other. The first one will provide proper kinetic-energy impact crater in order for the second one to efficiently disrupt the NEO, exploiting the inherent effectiveness of a subsurface nuclear explosion. For instance, it is known that a generic 300 kt nuclear explosion at 3 m depth of burst is equivalent to a simpler contact burst of approximately 6 Mt.

However, intercept missions will require impact velocities in the range of 10 to 30 km/s with respect to the target asteroid. Such velocities cannot be reached with existing launch vehicles. Furthermore, the penetrator’s impact velocity is limited to less than 300 m/s because state-of-the-art nuclear fusing mechanisms could be prematurely destroyed if travelling faster. Therefore hypervelocity interceptor/penetrator technology needs to be significantly advanced to use this approach.

During a Phase II study, Wie and the ADRC will take advantage of the Integrated Design Center (IDC) at NASA Goddard Space Flight Center to further develop, refine, and evaluate the HAIV-based mission architecture. The goals of the Phase II study are to advance the HAIV technology from a Technology Readiness Level (TRL) of 1-2 to 3 and to validate required technologies for the HAIV development. A near-term demo mission architecture (not carrying actual nuclear explosives) will also be developed.

Watch a presentation of ADRC’s activities below: