On the morning of February 14, when a meteor exploded over the Russian city of Chelyabinsk, the world woke up realizing that Near Earth Objects (NEOs) were not just the stuff of Hollywood movies. Since then, NEOs have acquired more and more headlines and funding and NASA is now even studying a mission to capture an asteroid and land astronauts on it.

NEOs are relatively small rocky bodies having an orbit around the Sun that brings them close to our planet. These objects, leftovers from the early stage of the solar system, range from meters to kilometers in diameter. Although the potential danger posed by NEOs is significant, we don’t know enough about our dangerous cosmic neighbours. Knowledge is fundamental to be prepared in case of a close approach, to assess the risk and possibly even try to prevent it. 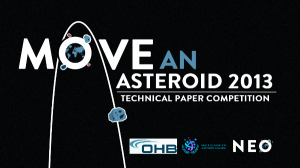 SGAC challeges students and young professionals to come up with innovative idea on how to deflect or use asteroids (Credits: SGAC)

NEOs are discovered with the help of the telescopes, taking pictures of a region in the sky minutes apart, to discover moving objects that may be asteroids. To help analyze the hundreds of images taken every night, the NEO Project Group of the Space Generation Advisory Council (SGAC) is organizing for the second year the “Find An Asteroid” Search Campaign. The campaign, in collaboration with the International Astronomical Search Collaboration (IASC) and with the support of the Minor Planet Center, is a fully online asteroid search campaign organized between August 14 and September 18, 2013. The search will be carried out by Space Generation members, organized in teams of up to 5 individuals that will analyze telescope pictures using special software. The goal is to spot unknown moving objects in the pictures that will be provided by IASC.

If a team discovers an asteroid, there will be further observations to refine its orbit and in a few years’ time that team may have the privilege to even suggest a name for the newly discovered object. Applications to participate in the campaign are open, until June 8, 2013.

The NEO Project Group is also organizing, for the sixth year in a row, a technical paper competition called “Move an Asteroid,” challenging students and young professionals to come up with innovative and original ideas related to NEOs. The topics of the competition include the standard deflection techniques and global warning systems, but also utilization of asteroids’ resources. The competition, sponsored this year by the German satellite manufacturer OHB, awards a scholarship to present the winning paper at the Space Generation Congress 2013 and at the International Astronautical Congress in Beijing, China.

All information about the NEO Group’s activities can be found at www.spacegeneration.org/asteroid

Below, a short movie by SGAC NEO Project Group about NEOs and planetary defense. (Courtesy of SGAC)