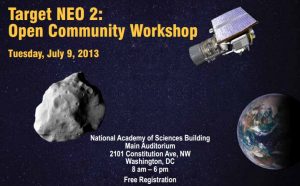 Target NEO Workshop held by the National Academy of Sciences explored the lack of target candidates for an asteroid retrieval mission (Credits: NAS).

Since its proposal in in 2012, NASA’s mission to capture an asteroid in a glorified drawstring bag and drag it into lunar orbit for study has come under fire from nearly every direction. Opposition to the mission is practically the only thing that unites proponents of a Mars mission and proponents of a Moon mission. Congress has threatened to block funding for the initiative (although in their current state of funding nothing much at all, that threat can’t be taken too seriously). NASA supporters, partner space agencies, and even NASA employees can’t muster much enthusiasm for a plan whose principal selling points are that a) it gives SLS a place to go and b) it’s the only thing NASA can afford.

While these debates are not likely to abate any time soon, the one question that has not received much attention is “can it be done?” Sure the technology seems sufficiently evolved to handle such a mission with a couple years of development, but capturing an asteroid requires more than technology: it requires an actual asteroid.

That may turn out to be a problem according to scientists participating in a Target NEO workshop sponsored by the US National Academy of Sciences on July 9. The Asteroid Retrieval Mission (ARM) requires a target asteroid within certain guidelines. It should have a diameter between 4 and 10 meters, be of solid – not rubble – composition, and its orbit must take it within the vicinity of Earth in the early 2020s.  It would also reduce mission risk if the asteroid has a slow spin rate and its orbit is not highly elliptical.

How many asteroids are currently known to meet those criteria? Maybe four.

The problem is that while monitoring near Earth asteroids is a priority initiative around the globe, the purpose of monitoring is to ensure large asteroids don’t impact Earth and cause massive damage. That means scientists are on the look out for large asteroids – 140 m in diameter and larger. Looking for asteroids as small as 4 m requires more telescopes, larger apertures, or longer dwell times. All of those distract resources from monitoring for potentially hazardous asteroids. Upgrades to the Catalina Sky Survey, reboot of the Wide-Infrared Survey Explorer, and use of two planned telescope arrays in Hawaii may help the hunt for more eligible ARM candidates, but it’s going to be a race between getting those facilities in place and the scheduled 2017 launch of the ARM mission.

When it comes to preparing for the inevitable future impact of a near Earth asteroid, developing the ability to shift potential projectiles into harmless orbits is high on the wish list. Testing out that ability on a small scale, however, may mean going – well, not quite blind, but pretty nearsighted – for a few years as we probe space for harmless pebbles on which to practice.

You can review the presentations from the Target NEO Workshop here.