On 12 August 1883 at 8:00 a.m., Mexico’s Zacatecas Observatory’s boss Jose A. Bonilla was preparing to study the Sun’s corona when he observed an amazing phenomenon. He saw several distant objects that were close together and crossing the solar disc. In the space of two hours, while the sky was clear and he was able to observe, he counted up to 283 bodies that crossed in the angular field of view of the projection lens. Between 8:00 a.m. on August 12 and 8:40 a.m. on August 13, 1883, Bonilla counted a total of 447 objects in the course of 3 hours 25 minutes of clear sky observation windows. That is an average of 131 objects per hour, meaning a total of 3275 objects must have passed the solar disk within 25 hours. 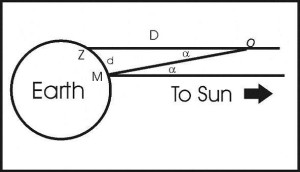 In 1886, without providing a hypothesis to explain the  phenomenon, Bonilla published his report in the French L’Astronomie magazine. “Their time intervals were variable, a body passing through would not take more than one third, half a second, or at most one second to cross the disc, and a minute or two passed before others appeared – some passed as 15 or 20 at once, so that was difficult to count them,” Bonilla reported. “I drew the trajectory of many of these bodies on the solar disc, marking their ‘entrances’ and ‘exits’ on the paper.”

At the time, there were several theories to try to explain the phenomenon, but none was very conclusive. The magazine’s editor used the “flock of bird” theory as a plausible explanation: he assumed that the objects could have been birds that crossed in front of Bonilla’s telescope. The fragmenting of previously observed comets in the same year, 1883 I (Brooks-Swift) and 1883 II (Pons-Brooks), could not explain Bonilla’s objects. Other astronomers adopted Bonilla’s event as the first evidence of unidentified flying objects (UFOs).

It was more than a hundred years later that scientists figured out what probably happened. A recent reanalysis of the observations by Hector Javier Durand-Manterola and two others at the National Autonomous University of Mexico in Mexico City show the event was a low-probability/high-risk event. They think the objects Bonilla recorded were fragments of a billion-ton comet that had recently been broken up in an approach almost flush with the Earth’s surface. They posit that the objects were fragments of a comet based on Bonilla’s description that the bodies “appeared dark-black and perfectly round and some more or less elongated when seen against the solar disc, became bright images as they left its edges and moved across the outer field of the lens.” The authors add that their premise is appropriate “because the only bodies in the Solar System which are surrounded by a bright mistiness are comets.”

Strangely, it appears no one else on the planet observed those fragments or the comet passing in the face of the Sun. In fact Bonilla noted in his report that the phenomenon was invisible to the nearest observatories of Mexico City and Puebla, which were just a few hundred kilometers away and were informed of the event after his first observation on August 12th. Manterola and his colleagues explain the invisibility using parallax. They point out that if, according to Bonilla’s information, the objects were invisible to observers at Puebla and Mexico City, then the fragments must have been close to Earth such that the objects would have been in line with the Sun only when viewed from Zacatecas. Parallax would have ensured that the objects were not aligned with a visual to the Solar Disc for other observers including those from Sahara, northern India and South-East Asia, that are located along the same latitude as Mexico.

The authors have used the invisibility aspect to place limits on how close to Earth’s surface the fragments must have been: between 500 km and 8000 km. That range lies in low Earth orbit (LEO) where, today, it could pose serious collision risk to active communication and observation satellites. More so, a few thousand kilometers from Earth is quite small when compared to astronomical distances. Imagine a Bonilla fragment at that distance and travelling at a velocity somewhere between 15 and 75 km/s, the velocity of meteors when entering Earth’s atmosphere: it is like a bullet grazing your head so close it shaves off some hair.

There is more to Manterola et al.’s deductions. They estimate that the widths of those objects must have ranged in size from 50 to 800 meters and their lengths from 70 to 1000 meters, which coincides with the values measured for the fragments of 73P/Schwassmann-Wachmann 3 comet which broke apart as it reentered the inner Solar System in 2006. In their analysis, they estimate that the mass of the comet before fragmentation was huge, a billion tons or more, approaching the mass of Halley’s Comet. 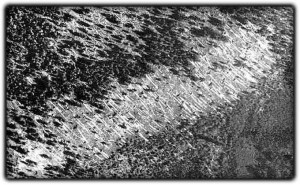 Tunguska region in 1938: Portion of one of the photos from Kulik’s aerial photographic survey (1938) of the Tunguska region.
The parallel fallen trees indicate the direction of the blast wave. About 2150 square kilometres of Siberian taiga were devastated and 80 millions trees were overthrown (Credits: University of Bologna).

The reanalysis of Bonilla’s data is an eye opener regarding the threat of low probability/high risk events. The authors spell out in their paper that these Bonilla’s fragments were close to impacting Earth. They state that “the calculated size of the objects is greater than or of the same order of the object which produced the Tunguska event. So if they had collided with Earth we would have had 3275 Tunguska events in two days, probably an extinction event.”

The Tunguska event was a large explosion over northern Russia in 1908 and it is the only entry of a large meteoroid in the modern era with first-hand accounts. The generally agreed upon theory is that the Tunguska event was produced by a 100 million kg space rock 60 m across that entered the Earth’s atmosphere and detonated at an altitude of 8500 m above Siberia, producing a fireball and releasing energy equivalent to about 185 Hiroshima bombs. That could’ve wipe out the largest metropolitan city with a population of about 33,000,000 had it been anywhere in the vicinity.

Now imagine 3275 Bonilla fragments, each with a destructive power equivalent to 185 Hiroshima bombs, all hitting Earth within two days. That would be a total destructive power of over 600,000 Hiroshima bombs, enough to wipe out  Earth’s entire population today. An impact in water near a city could have created a dangerous tsunami. It seems Earth narrowly avoided an extinction event just over a hundred years ago.