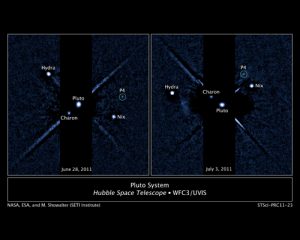 Photos of Pluto and P4 taken by the Hubble Space Telescope (Credits: NASA).

NASA engineers are evaluating concerns that the newly-discovered fourth moon orbiting Pluto could represent a danger to the New Horizons probe which is destined to perform a close flyby of the dwarf planet in mid-2015. The discovery highlights the possibility that there are still more undiscovered moons that are too small to be detected, which could be lethal to the spacecraft. Dr. Alan Stern, the New Horizons Science Team Principal Investigator from the Southwest Research Institute, concluded on November 7th that there is a “plausible chance that the New Horizons might face real danger of a killer impact”.

Although impacting an undetected moon would completely destroy the deep-space probe, the odds of making a direct are relatively low. More likely is that the moons could generate rings or even clouds of small debris that could damage the probe. Particles with mass less than a miligram could still penetrate the New Horizons’ micrometeorite sheilding as it passes through the system at up to 14 kilometers per second.

To evaluate the degree of risk presented by possible debris clouds, a panel of astronomy, orbital mechanics and ring system experts convened in Boulder Colorado  on November 3rd and 4th. They concluded that the probe’s trajectory could be altered, such that it would pass through the Pluto system at the point when Charon’s orbit is directly opposite the inner moon. Charon’s gravity naturally clears that region of debris, increasing the chances for safe passage. Correction into this so-called “Safe Haven Bailout” (SHBOT) trajectory would not be necessary until 2013. The panel also recommended further observations of the system by the Hubble Space Telescope and the ALMA radio telescope array. There are some concerns that additional small moons may be discovered that could pose similar hazards to New Horizons. 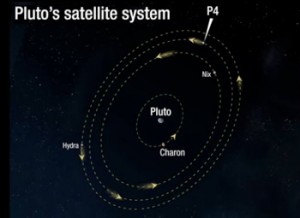 The moons of Pluto, including the newly-discovered P4 (Credits: NASA).

The new Plutonian moon, temporarily named P4, was discovered in July 2011 using images generated by the Hubble Space Telescope. Only a few tens of kilometers across, the moon orbits the icy dwarf planet Pluto between moons Nix and Hydra.

The New Horizons probe, launched in January 2006, aims to “help us understand worlds at the edge of our solar system” according to NASA. It will perform an unprecented flyby of the Pluto-Charon system, followed by an extended mission to one or more objects in the Kuiper belt beyond Neptune. In February 2008 it performed a close flyby of Jupiter, flying only 32 Jupiter-radii from the planet, roughly 3 to 4 times closer than the Cassini missions.

The video below shows footage of the New Horizons’ launch and an animation of its mission profile.