Having sent objects to space for more than 60 years, we are just starting to see the true face of space debris: Dead satellites re-enter our atmosphere and hit near our infrastructure or people (Figure 1), space debris hits the solar panels of the international space stations [1], operational satellites are hit by other dead satellites and destroyed [2]. These issues are giving rise to technical, legal and policy debates all over the world, as we try to find solutions to minimize the threats.

Figure 1: Examples of broken parts from space debris after re-entry [3]

In response to all these threats from space debris, we have started developing rules and regulations for reducing their impact. We now have guidelines governing when our dead assets should re-enter and how they should affect our environment from a safety point of view. Examples of guidelines and regulations that have addressed the space debris issue include the French Space Act which includes regulations for protecting both on orbit assets and off-orbit infrastructure and people [4], and the UN COPUOUS space debris mitigation guidelines [5]. Many legal issues still exist [6], but we seem to be moving in the right direction.

In spite of all these activities, there is still a problem. Such rules and regulations mainly apply to current or future launched objects. However, they do not address the problem of debris currently orbiting earth. A lot of the objects in orbit are not coming down soon and even if they do, they are going to pose safety threats to people on the surface of earth.

To solve the issue of current debris in orbit, several solutions have been proposed. Other than removing objects near the end of their life using onboard propulsion systems (which only applies to operational objects with propulsion systems), two other categories of proposals have been made to reduce the risks associated with current objects in orbit: On-orbit satellite servicing (OOSS) and active space debris removal (ADR).

OOSS focuses on reviving or increasing the life of a current space asset by refueling, repowering or performing other necessary changes to increase its life. Obviously, such an expensive endeavour might be cheaper than building and launching new assets, especially if the OOSS satellite is reusable. When taking into account the risks such objects pose after their death, the cost seems acceptable. This is especially useful if our satellite has dedicated functions that do not change drastically over time, such as a GPS or communication. On orbit satellite servicing is complicated due to the technologies that are required to “resuscitate” the satellite, such as injecting fuel into it or changing its batteries. Companies such as MDA are trying to develop capabilities to do such servicing missions [7, 8]. 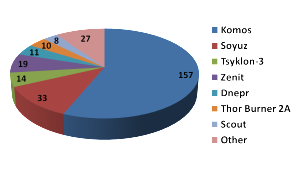 A more simple solution is to just remove the dead or near death object, especially when the object is at lower orbits and has functions that are now outdated. An active debris removal mission will usually involve a satellite performing a rendezvous with the object targeted for removal, initiating contact with the object, controlling its attitude, reducing orbital altitude and then removing it from orbit. Current space demonstrated technologies permit such activities to an extent and, if matured, can be used to remove space debris in a cost effective manner.

Research has shown that an exponential increase in space debris can arise from collision cascades between large objects in space [9]. Removing 5 large debris objects per year can stabilize the space debris environment in LEO [10], which has made ADR interesting for many stakeholders in space.

Many concepts have been proposed for active debris removal. Each concept usually has an applicable debris size associated with it. It seems reasonable to assume that, implementing several concepts together might help remove a large array of space debris of different sizes, retaining safety to many orbits.

It should be noted that, in spite of all the technical activities in the area of space debris, there are still many legal and policy hurdles that prevent us from addressing the space debris issue and implementing many of the solutions.

Space sustainability and safety is key for proper utilization of space in the future. As a result, the space generation advisory council’s space safety and sustainability project group is assessing issues in this area through several projects, one of which is the active space debris removal project. This project was initiated in 2011 and proposed a novel concept based on modified launch vehicle upper stages for active debris removal in low earth orbits.

One of the focuses of this project is assessing the debris environment and prioritizing targets for active space debris removal based on available space debris data. Currently, research is focused on space debris data from 2012, results of which will be presented during the International Astronautical Congress 2013. Figure 2 shows an example of the groups work on the composition of rocket body space debris at an altitude of 800-1000 km and inclination of 60-110 degrees.

Currently, the ADR team is also performing feasibility studies on using modified upper stages for ADR. As upper stages are useless after delivery of their payload, the ADR team has proposed the use of these objects as a possible platform for the integration of active debris removal subsystems and use in debris removal missions. The upper stage will act as a chaser, chasing the target debris, grabbing it and then removing it from orbit. As a result of this process, the target debris and upper stage will both de-orbit, reducing the number of space debris in orbit.

Analysis by the ADR team has shown that this is a plausible solution as most upper stages possess enough propellant for such a mission. Currently, the group is trying to finalize the mission by analyzing the grabbing phase and showing that such a mission will lead to a safe re-entry.

The ADR group has been successful at presenting these ideas at international conferences, including the SWF Space Sustainability conference 2012, the 6th European Conference on Space Debris and, more recently, the 6th IAASS Conference. It is also currently scheduled to present its findings at the International Astronautical Congress 2013 in Beijing.

Creation of space debris is inevitable; satellites might fail and launch operations might go wrong. But that does not mean that we cannot prevent them or mitigate the risks after debris is created. Many technologies we use in our lives such as communication and earth observation are based on space technologies. To be able to use such technologies in the future, we need free orbits for our systems. Orbits around the earth are a non-renewable resource and need to be utilized with care. We need to keep these resources clean and in good shape. Space debris removal is inevitable; it is a necessary evil.

By: S. Ali Nasseri. Nasseri is Executive Co-Secretary, Space Generation Advisory Council. His paper on Active Debris Removal using Modified Launch Vehicle Upper Stages Equipped with Electrodynamic Tethers recently won the SGAC – IAASS competition scholarship to attend the 2013 IAASS Safety is Not an Option conference in Montreal.  Nasseri models optimization of aerospace systems with special focus on space launch applications at  the University of Toronto Institute for Aerospace Studies, where he is pursuing graduate studies with the Combustion and Propulsion Group. Opinions expressed are those of the author(s) and do not necessarily reflect those of Space Safety Magazine, the International Association for the Advancement of Space Safety, and the International Space Safety Foundation.