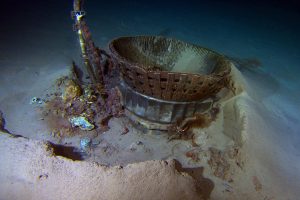 Jeff Bezos has successfully recovered enough components to reconstruct 2 Saturn V main engines from the bottom of the Atlantic Ocean.

Bezos, founder and CEO of Amazon.com had been planning to locate and raise the 3.76 meter diameter Rocketdyne F-1 engines since 2012, and on 20th March 2013 the mission was declared a success.

Bezos and the crew of the Seabed Worker, used ROVs to locate the historical engines used in the Apollo program, and he plans to restore them and place them on display, in order to inspire “something amazing”, and to motivate today’s generation to become involved in STEM subjects.

On a statement on Bezos’ website, the entrepreneur wrote, “We found so much. We’ve seen an underwater wonderland – an incredible sculpture garden of twisted F-1 engines that tells the story of a fiery and violent end, one that serves testament to the Apollo program.”

Amongst the components salvaged were heat exchangers, turbines, nozzles, thrust chambers and fuel manifolds. The components are suffering from some corrosion, and damage after their re-entry into the atmosphere and subsequent collision with the ocean surface, but efforts to restore them and prevent further deterioration will be underway shortly.

More stunning pictures can be seen on Bezos’ website.

Below: ROVs investigate the F-1 engines beneath the ocean.