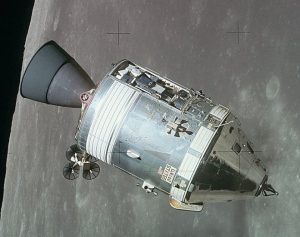 The rescue mission would have used a modified version of the Apollo Command and Service Module (CSM), developed by NAA itself as prime contractor for the project. The CSM would be modified to carry a special docking unit on the nose, configurable as an active probe or drogue. As a probe, it would have been used on the Apollo Lunar Excursions Module (LEM), while as a drogue, it would have worked on the passive docking device of a standard CSM. Since the status of the lunar mission requiring rescue could have been unknown from Earth, the engineers gave the rescue astronaut the ability to change configuration in flight. Moreover, the astronaut would have been provided with a tether, a life support extension, a compressed gas-propelled device, and protective meteoroid clothing, in case the mission required a spacewalk. That is also why the CSM would carry an inflatable “handrail” to help astronauts to traverse the distance between the two spacecraft once they were close.

The total mass addition to the rescue CSM would total 200 kg (445 lb), partially balanced by the absence of 188 kg (415 lb) of science equipment not needed in a rescue. 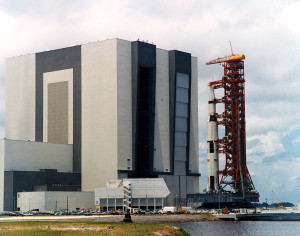 Vehicle Assembly Building at KSC, where the rescue Saturn V and CSM would have been stored according to a NAA project (Credits: NASA).

NAA obviously considered the worst case: a rescue CSM launched as soon as NASA would get word of critical problems in the Apollo mission. In such a case, the CSM would be launched without preloaded calculations to match orbits and rendezvous with the stranded spacecraft. Therefore the astronaut on the rescue CMS would need to be able to use the propulsion system main engine “manually” to achieve an orbit close to the stranded spacecraft. However, launching immediately could create even more complications like increasing duration of the rescue mission and of course, putting even more astronauts in danger. The development of this safety module would have cost NASA a total of $86 million.

NAA engineers did not discuss how astronauts, stuck in a small module, could survive with a limited supply of consumables like breathable oxygen and lithium hydroxide for removing carbon dioxide. Another important issue was the possible danger involved in keeping the rescue CSM and a fully loaded Saturn V on standby at the launch pad  for the entire duration of the mission.

Considering these technical difficulties and the cost, NASA in the end chose to not go for a rescue mission in lunar orbit. A scenario like the one pictured by NAA engineers happened during the Apollo 13 mission, but thanks to the flight control team the mission  didn’t end up in tragedy. However, the feasibility and development of a possible rescue mission may again be an important topic of discussion while designing future planetary missions.

Below, a NASA documentary of the near-fatal Apollo 13 mission in 1970: