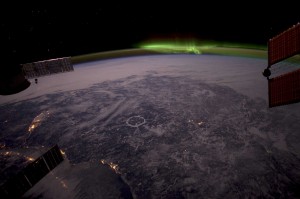 Astronaut Don Petit is no stranger to aurorae. He’s taken photographs of aurorae from space on each of his three missions – to ISS in 2002, the Space Shuttle in 2008 and now on his second stay aboard the space station.  After his first mission, Pettit described the experience: “It was as if we were in a dimly glowing fog of red. It was like you had been shrunk down to some miniature dimension and inserted into the tube of a neon sign.”

On this mission, Pettit is getting his fill of aurorae. 2012 has witnessed a  dramatic increase in solar storms whose radiation and ionized particles spark the aurora effect. In the beginning of February, the Canadian Space Agency began a pilot program to photograph Canadian aurorae from the AuroraMAX observatory and the ISS at the same time. When an active aurora is expected, astronauts Don Pettit and Dan Burbank go on standby to catch images of the phenomenon from space while the public can watch live video feed from AuroraMax online. It is hoped that comparing images from Earth and from space will shed light on the formation of aurora and the forms they take. The first synchronized recording took place on February 7.

The next active period has been forecast for March 8 following two March 6 coronal mass ejections that are expected to result in a severe geomagnetic storm on Earth, with possible  disruption of high frequency radio communication, GPS, and power grids. While Pettit says so far 2012 has not produced as spectacular visions as he witnessed from ISS in 2003, a very active solar year, he notes “this expedition is not over yet!”

See a time lapse video of  Pettit’s recent images below: