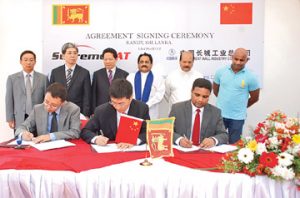 The signing ceremony for the agreement that will create a Sri Lankan Space Academy (Credits: Saliya Rupasinghe).

“I am very glad that this venture coincides with the vision of the President to make Sri Lanka a knowledge hub,” said R.M. Manivannan, chairman of SupremeSAT. “It would help take Sri Lanka closer towards the goal of becoming the Wonder of Asia.”

The landmark agreement was signed at the Kandy Board of Investment zone by Manivannan, Zhang Xiaodong, Executive Vice President of CGWIC and Li Jie, President of SinoSAT. The proposed Space Academy will consist of a state-of-the-art Satellite Ground Station which will provide on-the-job-training to Sri Lankan engineers in order to handle operations of the already co-branded SupremeSAT/Chinasatcom satellite, in orbit since July 2012.

The agreement will use Chinese expertise in space science to further boost the size and the quality of the science and engineering pool in Sri Lanka, providing the country with skilled workers and accelerating the growth of the economy. This Chinese investment, worth US$ 60-million, is the biggest foreign-funded private sector investment in Sri Lanka’s Central province and is expected to give confidence to other private sector companies in the world to invest in Sri Lanka.

A further agreement to build the first Sri Lankan satellite is expected to be signed next October in China. Built at the CGWIC facility, the satellite would be launched from Beijing and orbiting over Sri Lanka by December 2015.