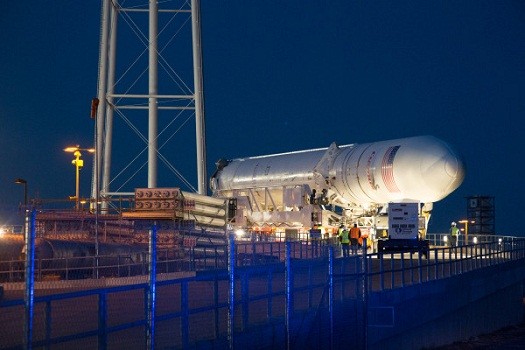 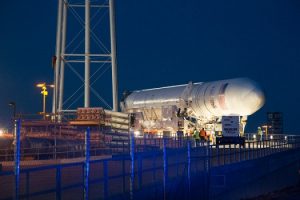 Antares on board the TEL vehcile, to be placed at the launch pad (Credits: NASA).

Orbital Sciences Corporation has confirmed that the Antares rocket test flight will commence on April 17. In the meantime, the first fully-integrated Antares was rolled out from its assembly at NASA’s Wallops Flight Facility (WFF), on April 6.

“With the completion of the Antares roll out today,” said Mr. Michael Pinkston, Orbital’s Antares Program Manager, “we are on a clear path to a launch date of April 17, provided there are no significant weather disruptions or major vehicle check-out delays between now and then.”

The Antares rocket was transported to the launch pad complex aboard the Transporter/Erector/Launcher (TEL), a specialized vehicle that also raises the rocket to a vertical position and serving as a support interface between the rocket and the launch complex systems. The first Antares test flight, referred to as A-ONE, is the first of two missions scheduled by Orbital to be conducted in 2013. Following a successful completion of A-ONE launch, the Virginia based company will execute a full flight demonstration of its new Antares/Cygnus cargo delivery system to the International Space Station (ISS). Antares is medium-class launcher capable of launching up to approximately 6350 kg into low-Earth orbit.

Orbital is testing the Antares rocket and are developing the Cygnus cargo spacecraft under NASA’s Commercial Orbital Transportation Services (COTS) program. The COTS initiative is helping the development of the U.S. commercial space transportation industry. The aim is to have a safe, reliable and cost-effective transportation to and from ISS, and low-Earth orbit in general.

Orbital previously conducted a “hot fire” test of the Antares’ engines, on February 22. The dual AJ26 rocket engines fired for approximately 30 seconds while the first stage was bolted down. The test demonstrated the readiness of the rocket’s first stage and launch pad fueling systems to support upcoming test flights.

Following the successful completion of the COTS demonstration mission to the station, Orbital will begin 8 cargo resupply missions under the NASA’s Commercial Resupply Services (CRS) contract. Additionally, the company has also signed a contract with the U.S. Air Forces to provide Antares for their medium-sized spacecraft. All the launches will be carried out from WFF, which is well located geographically, for ISS, defense and commercial missions.

The Antares inaugural flight will occur at approximately 5:00p.m (EST) on April 17.

Below: The Antares en route to the launchpad at Wallops: