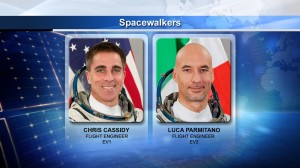 Astronauts Chris Cassidy and Luca Parmitano went outside the International Space Station (ISS) in a scheduled Extravehicular Activity (EVA) on July 9. The EVA was scheduled to perform a variety of activities on the exterior of the US segment of the orbiting laboratory.

“In a few hours, from the AirLock, a new stage of this extraordinary experience will begin,” wrote an enthusiastic Parmitano on Twitter before the EVA. “My thoughts are of gratitude for this privilege.”

Veteran spacewalker Cassidy and Parmitano, on his first EVA experience, ventured outside the Quest airlock at 12:02 GMT. Both astronauts started their preparation for the EVA while they were still on Earth, going through many rehearsals of their individual tasks. The preparation continued in orbit, reviewing the many procedures that they had to perform, helped also by virtual reality devices.

To enable the spacewalk, the station was moved again to the nominal orientation from the attitude acquired on June 30 to perform the Solar’s observations. Cassidy was the first to go out, followed by Parmitano, but they soon separated to performed different tasks. The US astronaut was initially sent to replace the Space to Ground Transmitter Receiver Controller-2 (SGTRC-2), which failed in December 2012. SGTRCs are crucial parts of the station Ku-Band communications systems, used to receive and transfer data via NASA’s Tracking and Data Relay Satellite System. Meanwhile, Parmitano translated on the truss to retrieve the Materials International Space Station Experiment 8 and the Optical Reflector Materials Experiment. Parmitano also took pictures of the Alpha Magnetic Spectrometer 2. The pictures will provide scientists with information on the health of the instrument, after more than 2 years in orbit. Then, Cassidy started the cable routing task in preparation for the arrival of the Multipurpose Laboratory Module, delayed to spring 2014 because of the recent Proton rocket failure.

Both spacewalkers joined force to install the two Radiator Grapple Bars (RGB). RGBs would allow Canadarm2 to handle and hand-off large radiators in the event of a failure of the replacement operation at some point in the future. To support RGBs’ installation, Parmitano had to ride the Canadarm2, operated by astronaut Karen Nyberg from inside the station. Cassidy and Parmitano repeated the RGB operation on both the starboard and the port side.

The US EVA-22, the second spacewalk of Expedition 36 after Russian EVA-33, was completed ahead of schedule, in 6 hours and 7 minutes. Cassidy and Parmitano will venture outside once again on July 16, to perform another series of tasks.

Below, highlights of the EVA-22 (Courtesy of NASA TV).