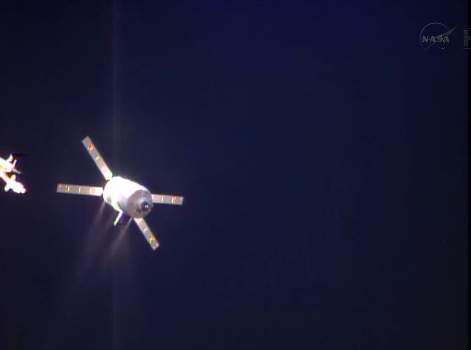 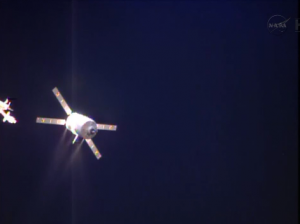 “Bravo Europe, bravo ESA, bravo ATV. Thank you Member States, thank you industry, thank you CNES, thank you Russian partner,” said a proud Jean-Jacques Dordain, Director General of ESA. “With the fourth ATV now ready to support and supply the Space Station with essential supplies and scientific experiments, ESA again proves itself to be a reliable partner in the international station upon which the future can be developed.”

The 20-ton ATV-4, named after Albert Einstein, docked with the Zvezda service module on the ISS at 14:07 GMT, about 20 minutes behind schedule. When the spacecraft stopped at the S3 waypoint at 249 m from the ISS, the flight controllers of the ATV Control Center in Toulouse, France, took extra time to update their abort tables based on the results of navigation system checkouts. ESA Astronaut Luca Parmitano and Russian cosmonaut Aleksandr Misurkin started their monitoring from inside the Zvezda module, using external cameras and ATV navigation data, when the spacecraft was at a distance of 15 km. From that location, the astronauts could have sent hold, retreat or abort commands, in case the ATV had been off course. 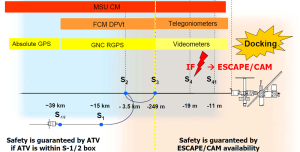 From the S3 waypoint the spacecraft transitioned from using GPS data from both the ATV and ISS to calculate ATV’s relative position and velocity, to its proximity and close range navigation equipment. The sensors aiding the ATV in the final approach consist of two videometers and two telegoniometers as a backup. The videometers pulse laser beams to the station at very high frequency. The light pulsed is reflected back by 26 mirrors on the Zvezda module, creating a light pattern, which is captured by cameras aboard the spacecraft. The ATV’s on board computer calculates then range, closing rate, and orientation, to ensure a safe approach.

The gentle autonomous docking on the Zvezda’s aft port between the bus-sized ATV and the 420-ton Station was barely noticed by the crew members. To compensate atmospheric drag, ATV is loaded with 2580 kg of propellant, used to perform periodically reboosts. In addition, the spacecraft also delivered 860 kg of fuel, 100 kg of oxygen and air and 570 kg of drinking water, to be pumped into the Station’s tanks. The pressurized cargo consists of 2480 kg of scientific equipment, spare parts, food and clothes.

The end of the ATV-4 mission is scheduled for October 28, when the spacecraft packed with waste will separate from ISS to burn up in the atmosphere over the Pacific Ocean.

Below, the ATV-4 docking sequence (Courtesy of ESA).