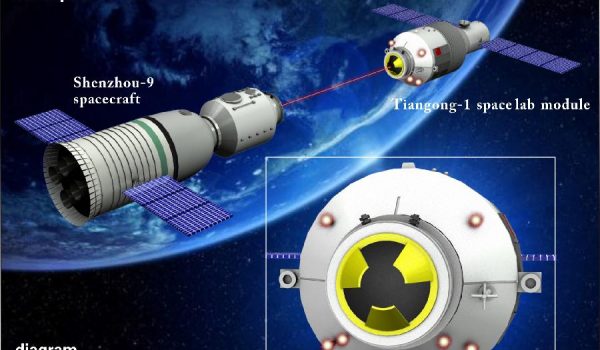 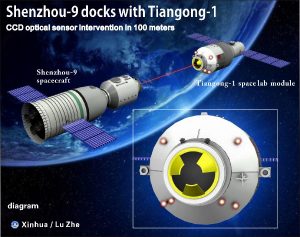 Diagram of the docking between Shenzou-9 and Tiangong-1 in June 2012 (Credits: Xinhua ).

China announced that it will launch a new manned space mission between June and August 2013.  Three taikonauts will comprise the crew.

“The 3 astronauts will stay in orbit for 15 days, including 12 days when they will work inside the coupled complex of the Shenzhou-10 and Tiangong-1,” said Zhou Jianping, the head designer of China’s manned space program

The crew will launch aboard Shenzhou-10 (Chinese for “Divine vessel”), which will dock with the orbiting lab module Tiangong-1 (Chinese for “Heavenly Palace”).  According to Zhou, there will be a female taikonaut in the mission, together with two male colleagues.

The aim of the mission is to assess the performance of the docking system, the space station’s capability to support life and work, and the taikonauts’ ability to fulfill their tasks according to schedule.  Research will be conducted on taikonauts’ adaptation to the module environment and tests performed on repairing the orbiting spacecraft. These are all key steps for further developing the space station.  The three taikonauts will also take the opportunity to popularize scientific endeavors and inspire enthusiasm for science, giving science lectures to students via video feed while they are working in the module. 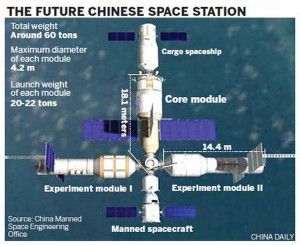 The future Chinese space station will be ready in 2020 (Credits: China Daily).

The space lab Tiangong-1  was sent into space in September 2011. It later docked with the unmanned Shenzhou-8  in November 2011, and with the manned Shenzhou-9  in June 2012. There are some indications that Shenzhou-10, which is currently undergoing testing, will attempt a different rendezvous approach than used on the last two missions.   It will be launched aboard a modified model of the Long March-2F.

China is planning to build and complete its own medium-sized space station around 2020.  According to Zhou, the future space station will be an example of green technology: using cutting-edge technologies in flight control, power supply, and waste recycling to reduce its dependence on supplies from Earth.  According to Chinese officials, the space station will consists of three modules, including a core module and two laboratory units.  It will support  the docking of three capsules and the entire system will weigh over 90 tons.

Below, watch the docking of Tiangong-1 and Shenzhou-9: