China’s plan to launch the 16th satellite of the Bediou constellation this month will usher in the capability for the navigation system to begin providing free civilian navigation services in the Asia-Pacific region beginning in early 2013.  There are currently fifteen satellites in orbit with five launched so far in 2012.  The current constellation of satellites consists of five in geostationary orbit, five in inclined geostationary orbit and five in medium Earth orbit. 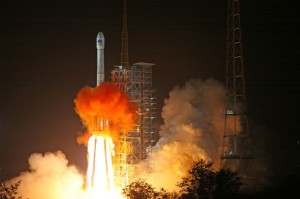 The seeds of China’s global navigation project were planted in 1983 after a proposal was made by Chen Fangyun to develop a regional navigation system using two satellites in geosynchronous orbit in contrast to the system utilized by the United States’ GPS. In 1989, using two in-orbit DFH-2/2A communications satellites, the two-satellite concept was proven comparable to the United States’ GPS in terms of precision.

The Bediou program consists of two phases.  The first phase, Beidou-1, was approved in 1993 after this successful demonstration using the DFH-3 satellite as the platform.  The first two indigenous Beidou experimental navigation satellites were launched in 2000. The final Beidou-1 constellation consists of four geosynchronous satellites: Two operational satellites and two satellites to serve as backups.

The two-satellite concept achieved similar accuracy to the United States’ GPS, but it did have its drawbacks. On the other hand, it did provide for a China with only two satellites an indigenous, independent, high-accuracy military navigation system that could function in anything less than total war with a major military power as well as support military communications.  Despite the success of the two-satellite system, the geosynchronous system was limited to the Asia-Pacific region in terms of coverage and that along with its other limitations prevented its marketability in certain areas of the commercial global navigation market. To meet this challenge, China formed a private company to develop the commercial capabilities of the Beido system and a announced in 2006 the deployment of a supplementary system to the geosynchronous Beido system.

The second phase of the system, Bediou-2, will consist of a constellation of 35 satellites. Five of the satellites would reside in geostationary orbit. The other thirty satellites of the system were to occupy medium-earth-orbit (12-hour, 55 deg inclination, 11,339 nautical mile (21,000km) altitude circular orbits) and use the same navigation principle as the United States’ GPS. These satellites are planned to provide two-levels of service. The first, a public service, would be free to China’s citizens and have an accuracy up to 10 meters. The second service would be a more accurate military signal that would also provide system status information for the constellation and the capability to manage military communications.

Once fully active, this regional navigation capability will provide an indigenous means of satellite navigation, which the GPS system belonging to the United States currently enjoys.  However, the availability of the Bediou system regionally will not immediately erode the usage of GPS since 95 percent of the navigation terminals sold in China are for the GPS system.