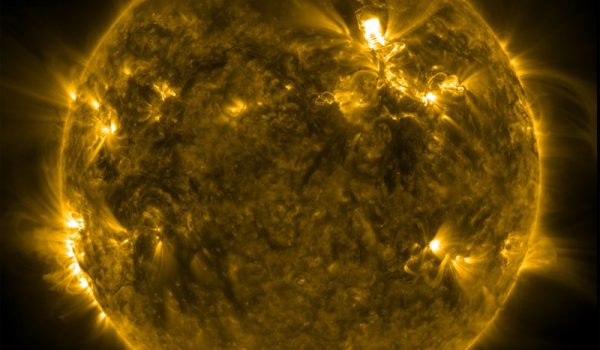 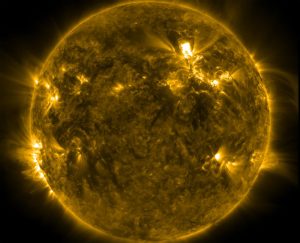 Despite warnings that Tuesday’s massive solar flares and associated coronal mass ejection (CME) might cause disruptions to power systems on Earth, there were almost no reported effects as the CME flew past. The two X-class solar flares, part of the largest solar storm since 2005, were predicted to cause a geomagnetic storm of between class G2 and G3 (G5 being the most intense possible rating).

Joseph Kunches, a space weather scientist from the National Oceanic and Atmospheric Administration (NOAA), said that the threat posed by the CME might have been overestimated. “We expected the freight train. The freight train has gone by […] and now we’re watching to see how this all shakes out,” said Kunches.

This week’s intense solar activity is part of a repeating eleven-year cycle during which the sun periodically alternates between high solar flare intensity and quiet periods. The peak of the current cycle is expected to occur in 2013, so intense solar flares like those on Tuesday will likely get worse before they get better.

Despite a number of warnings, several American utilities operators, including MidAmerican Energy Company and Atlanta-based Southern Company, reported no disruptions to their electrical systems. Still, some scientists are cautioning that effects could manifest later as the solar storm continues to bombard the magnetosphere.

Many commercial airline companies aren’t taking any chances with the storms: Delta Airlines, for example, diverted seven flight routes southward, away from the North pole where effects from the storm could cause communication issues and expose passengers and pilots to radiation. According to American Airlines spokesperson Ed Martell, the company would not divert any flights. He told Fox News that “[American Airlines is] monitoring the solar flare activity, and while we’ve not changed any routings, we are using lower altitudes for any flights routed above 60 degrees North”.

Intense solar radiation can cause disruptions of ground-based electrical systems; a study released last week by the North American Electric Reliability Corporation concluded that the most likely outcome of geomagnetic storms is a loss of reactive power available on the electrical grid. It is believed that a blackout in March 1989 experienced by Canadian electrical operator Hydro Quebec was caused by such an event.

Radiation from Tuesday’s flare also bombarded the Venus Express probe, blinding its star sensors.  Its ESA operators are still scrambling to get the spacecraft’s orientation system back online.

The video below shows an animation of the tools used to predict the effects of solar storms on Earth’s magnetosphere.
[youtube http://www.youtube.com/watch?v=b22Ej14ar4I]