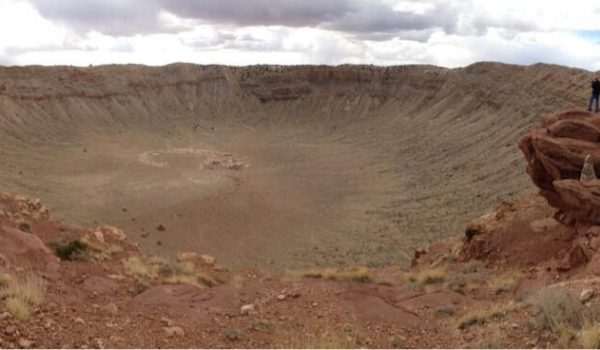 A session of PDC2013 took place at Meteor Crater in Arizona, on April 17 (Credits: NASA EDGE)

Scientists, engineers, and policymakers gathered to discuss initiatives to protect the planet in the event of a large asteroid impact at the 3rd International Academy of Astronautics Planetary Defense Conference (PDC2013), in Flagstaff, Arizona, from April 15 to 19.

“People all over the world have really now seen what happens when as asteroid hits the Earth and it’s very visceral. You can understand it. ‘I’ve seen this thing in the sky and the explosion,’ and so on and there’s a lot of attention now,” said David Trilling, Assistant Professor at Northern Arizona University’s Physics and Astronomy Department.

The space rock that exploded over the Russian city of Chelyabinsk in February raised many questions about preparations to face future similar threats. The Planetary Defense Conference tried to answer some of these questions, exchanging knowledge of asteroids, presenting new efforts to characterize them, and discussing ways to mitigate those that pose a threat to Earth.

NASA Deputy Administrator Lori Garver made a surprise appearance to open the conference, describing NASA’s proposed asteroid retrieval mission, and how private companies like Planetary Resources or Deep Space Industries can contribute to the mission.  Scientists stated that there are about 9 million asteroids with a size similar to the one that exploded over Russia. However, although the current near Earth object (NEO) discovery rate is about 1000 per year, fewer than 1% of the space rocks smaller than 100m have been found.

New modeling was demonstrated, showing that rubble-pile asteroids can remain intact past the point when their spin might normally break them up, likely because of the cohesive forces between the smallest grains in their size distributions.  There were presentations about NEO deflections with impact vehicles and nuclear blasts near an asteroid to vaporize the surface and create a small thrust force to deflect it.  Researchers at Purdue University and Imperial College of London developed a web-based computer program to calculate the effects of a meteoroid impact on Earth.

Attendees at PDC2013 were even brought to the bottom of Meteor Crater in Arizona for a presentation by David A. Kring of the University of Arizona’s Lunar and Planetary Laboratory about the huge asteroid Eros.

The conference, followed worldwide via live stream and Twitter feed, highlighted that, even before mitigation actions, we need to know more about asteroids and we need to develop improved capacity to spot them.