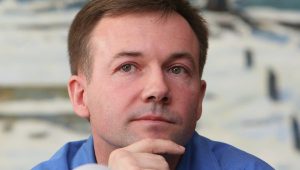 According to Russian news agency RIA Novosti, Cosmonaut Yury Lonchakov has submitted his resignation on September 5. According to Sergei Krikalev ,  administrator of the Gagarin Cosmonaut Training Center, Lonchakov has found a “more interesting job”.
Lonchakov, 48, has been a cosmonaut since 1998, and has been into space on 3 occasions, spending over 200 days in orbit. He was scheduled to fly to ISS in 2015, and as yet no replacement has been selected for his place.

He will be formally discharged from his job at the Gagarin Cosmonaut Training Center on September 14, reports RIA Novosti.

It has been suggested that there have been murmurs of discontent among the ranks of cosmonauts since the training center was transferred from the Defense Ministry to the Russian federal space agency in 2009. According to the Moskovsky Komsomolets newspaper, the prolonged reorganization period has affected the salaries and career prospects of the cosmonauts.

This appears to be reflected in the number of applicants for cosmonaut positions. Russia’s first ever open cosmonaut recruitment campaign attracted a mere 300 applicants when it was staged last year, compared to over 8000 for NASA. Apparently, being a cosmonaut is not something that Russian children aspire to, with only 5% stating that they would like a career in space. According to a 2011 study by Russia’s Public Opinion Foundation, more children would rather be doctors, pilots, teachers…or truck drivers.

Given that the above listed professions tend to earn more than today’s cosmonauts, it’s not surprising that Russian children aspire to more grounded and lucrative professions.

One pressing question remains however…

What could possibly be a more interesting job than a cosmonaut?

Share your thoughts with us in the comments below.