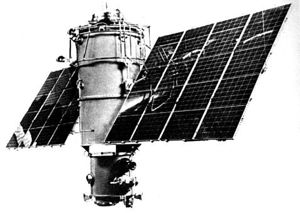 Cosmos 1484, an Earth resources satellite launched by the Soviet Union, reentered the atmosphere over the Eastern United States on January 28, 2013 at 9:30 pm EST.  Multiple reports of fireballs along the projected track of the satellite confirm that this was the remains of the satellite.  There were no reports that any debris from the satellite reached the ground or caused damage, which could have invoked the Rescue Agreement or the Liability Convention.

Cosmos 1484 was launched from the Baikonur Cosmodrome on July 24, 1983 aboard a Vostok rocket. It was the second flight of a prototype for the Resurs-O1 spacecraft, which was based on the Meteor spacecraft, and it was placed in a sun-synchronous orbit where it performed its observation activities.

Cosmos 1484 was used to gather information on the natural resources of the Earth for use in various branches of the Soviet economy.  It also conducted tests on new types of a measuring instruments as well as methods of remote sensing of the Earth’s surface and atmosphere. After the satellite’s mission was complete in 1984, it continued in its orbit as a derelict and suffered a fragmentation event on October 18, 1993; however, the spacecraft did remain relatively intact.  The satellite’s orbit degraded over the next twenty years before its return on January 28th, marking almost thirty years in orbit.

While Cosmos 1484 spent most its time in orbit as a derelict and thus space debris, even though it was relatively short-lived space debris.  Current space debris mitigation guidelines for new spacecraft recommend that space debris remain in orbit for no more than 25 years before it reenters the atmosphere.  For spacecraft in low Earth orbit this is seldom an issue since atmospheric drag will eventually slow down space debris allowing it reenter.  However, space debris located in medium and geosynchronous orbits can potentially remain there for hundreds of years or indefinitely unless they are purposely decommissioned and decelerated to a lower orbit or boosted to a higher graving orbit where they will not interfere with the orbits of other spacecraft.   A good example of a recent decommissioning is the Landsat 5 satellite, which was launched a year after Cosmos 1484 and was recently removed from service after 29 years.  As part of the decommissioning, Landsat 5’s rocket motor was fired on January 15th to lower its orbit so that that it will not be a hazard to other spacecraft in that orbit, including the still functioning Landsat 7.