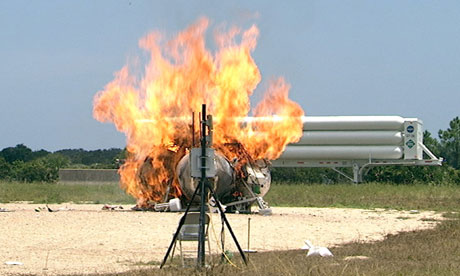 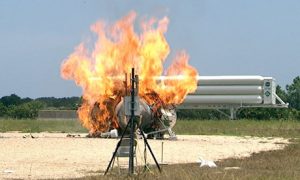 In its first untethered test, the experimental lander Morpheus flopped on its head, crashed into its launch pad, and burst into flames before exploding.

“No one was injured, and the resulting fire was extinguished by KSC fire personnel,” NASA’s Kennedy Space Center (KSC) said in a statement. “Engineers are looking into the incident, and the agency will release information as it becomes available.”

Morpheus is a NASA project, designed as a test bed for autonomous landing and hazard detection that could be employed in a future deep space or lunar mission. The system takes a vertical thrust and landing approach and uses a liquid oxygen-methane propulsion system that could conceivable be replenished from a planetary surface mid-mission.

Morpheus underwent 19 tethered tests over the course of a year. In initial tests, the lander swung wildly on its tether, but by the end it had achieved control and stability in hover mode. By all indications, Morpheus was ready to go it alone.

However, the lander never got a chance to show its stuff on the specially designed hazard field it was intended to navigate at the Shuttle Landing Facility in Florida.  Within seconds of ignition, the Thrust Vector Control system suffered a major malfunction. “During today’s free-flight test, the Project Morpheus vehicle lifted off the ground and then experienced a hardware component failure, which prevented it from maintaining stable flight,” according to the KSC statement.  NASA has posted video of the test on its website (see below) but has made no other comment or explanation for the failure.

Watch below as Morpheus is rolled out to the test site, passes a preliminary tethered test, then immediately lands on its head, bursting into flames in its first attempt at free flight: