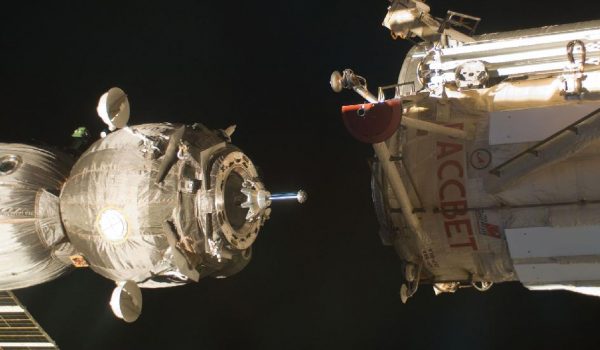 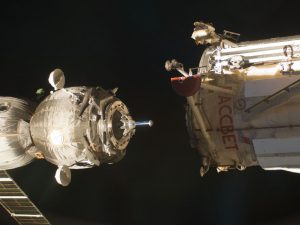 The Soyuz TMA-03M, which carried the first half of Expedition 31, preparing to dock with the Rassvet module in December 2011 (Credits: NASA).

The Soyuz TMA-04M that launched from Baikonur Cosmodrome on May 15 carrying cosmonauts Gennady Padalka and Sergei Revin and astronaut Joe Acaba successfully docked with the International Space Station Poisk module on May 17.

After joining ISS residents Oleg Kononenko, Don Pettit, and Andre Kuipers for a welcome ceremony, the new crew will begin familiarizing themselves with the station. They will need to get up to speed quickly, since delays in their launch have reduced their stay to126 days. The next few months are expected to be very busy, starting with the May 19 docking of the SpaceX Dragon capsule, the first commercial cargo vessel to attempt to dock with the ISS. Unlike the automated Soyuz docking, the Dragon will be manually grappled to the Harmony node using the robotic Canadarm2. 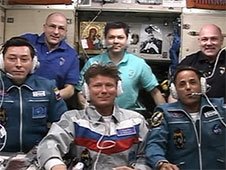 Today’s docking occurred on Acaba’s 45th birthday. Acaba has further reason to celebrate, following a recent announcement that he has been admitted to the College of Education at Texas Tech doctoral program in education. Acaba will begin online courses when he returns to Earth in September. Acaba is a veteran science teacher and the second astronaut to attend Texas Tech, following Dean Sacco.

Padalka and Revin will have some new equipment to test during this mission. Ria Novosti, the Russian news agency, supplied them with a  FujiFilm Real 3D W3 camera – the first 3D camera on the ISS. ISS crew always enjoy taking photographs, but the cosmonauts are now also charged with capturing stereo images and videos during their stay. The first batch of images will return with Kononenko, Pettit, and Kuipers when they return to Earth in July, but the camera will stay onboard for further use.

Watch the docking of the Soyuz TMA-04M to the Poisk module below: