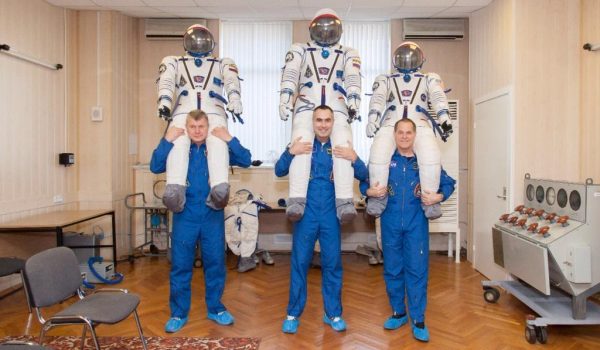 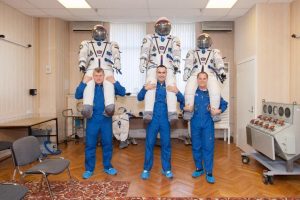 Three new crew members joined their Expedition 33 crewmates after docking the Soyuz TMA-06M spacecraft to the Poisk module at 8:29 a.m. EDT Thursday October 25. They join Commander Suni Williams and Flight Engineers Aki Hoshide and Yuri Malenchenko who’ve been residing at the orbital laboratory since July 17. Hatches between the International Space Station and the Soyuz opened at 11:08 a.m. after pressure and leak checks.

Flight Engineers Kevin Ford, Oleg Novitskiy and Evgeny Tarelkin orbited the Earth for two days inside the Soyuz. The new trio launched at 6:51 a.m. Tuesday from the Baikonur Cosmodrome, Kazakhstan.

Ford’s last mission was as a pilot aboard space shuttle Discovery in 2009 during the STS-128 flight to the space station. The two week mission delivered experiments and gear inside the Leonardo multi-purpose module and exchanged two Expedition 20 crew members.

This is the first spaceflight for both Novitskiy and Tarelkin.

Expedition 33 will be a six-member crew until Nov. 12 when Williams, Hoshide and Malenchenko undock from the Rassvet module and return home inside the Soyuz TMA-05M spacecraft for a landing in Kazakhstan. When they undock Expedition 34 will officially begin as Ford becomes commander staying behind with Novitskiy and Tarelkin finally returning home in March 2013.

Back on Earth three more crew members are in Star City, Russia, training for their Dec. 5 launch to return the station to a six-member crew. Veteran astronauts Chris Hadfield and Tom Marshburn along with veteran cosmonaut Roman Romanenko will complete the Expedition 34 crew. They will start the Expedition 35 crew beginning in March.

Hadfield last visited the station in April 2001 aboard space shuttle Endeavour as an STS-100 mission specialist. During two space walks he helped install the Canadarm2, the station’s robotic arm. Hadfield will be Canada’s first station commander when Expedition 35 begins.

Marshburn went to the station in July 2009 aboard shuttle Endeavour for the STS-127 mission. He performed three spacewalks to help complete the construction of the Japanese Kibo laboratory module.

Romanenko served as a flight engineer for Expedition 20/21 for six months in 2009.

Watch the new crew board the International Space Station: