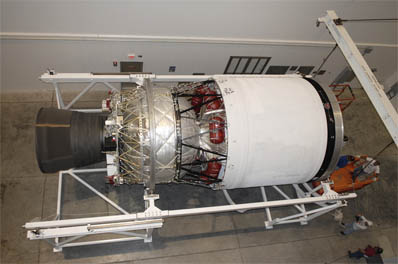 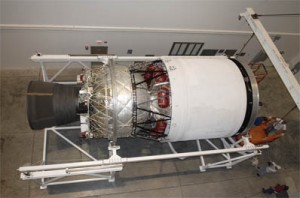 On October 4, a United Launch Alliance (ULA) Delta 4 rocket took off, carrying a GPS satellite. Low thrust in its upper stage could have resulted in a misplaced satellite that day but for a successful compensation using reserve fuel. As a result of the anomaly, Delta 4 flights were delayed, as was flight of the X-37B which launches from an Atlas 5 using the same engine family, the RL-10, that experienced the anomaly.

It now seems that an investigation has uncovered the main events of the anomaly, as reported by Spaceflight Now. When the Delta 4’s upper stage ignited, a leak began above the trust chamber. Each of the subsequent burns produced less thrust than planned due to the leaking propellant. In what turned out to be a combination of good planning and sheer luck, the closed loop guidance system observed the subnormal thrust and compensated using reserves. The satellite was luckily below Delta 4’s lift capacity, so there was more reserve available to draw upon than is usually the case. After placing the GPS satellite in its intended orbit, the upper stage even had about 30 seconds of burn left in it. “We were later informed by our GPS customer that this was the most accurate placement of the three GPS 2F spacecraft that have been launched,” said  ULA vice president of mission operations Jim Sponnick.

The guidance system more or less saved this mission on its own, since mission control would have been unable to develop a solution in th available time. In fact, they were not able to precisely quantify the leak until after the fact, leaving great uncertainty at the time as to whether the propellant reserves would be adequate to compensate.

ULA has still not discovered what could have caused the leak in the first place. They are in the process of narrowing potential causes down from an initial brainstorm of over 500. One of the first steps was to evaluate which of these potential causes would have crossover – i.e. would also impact the RL10A-4 engine used by Atlas 5’s upper stage. Officials with both ULA and the US Air Force seem convinced that crossover causes have been adequately assessed, since they have put the third X-37B flight back on the launch pad.

The X-37B Orbital Test Vehicle 3 (OTV-3) space plane is now slated to launch on the afternoon of December 11. This is the third test flight of the snub-nosed shuttle-esque vehicle and the first reflight of an OTV. As usual, the Air Force is keeping mum on the duration and mission of the reusable space plane. The last X-37B test flight remained aloft for 468 days, well beyond its designed flight duration of 270 days.

All ULA launches are expected to be back on scheduled by mid-February.

Below, the June 16 2012 landing of the OTV-2 at Vendenberg Air Force Base in California: