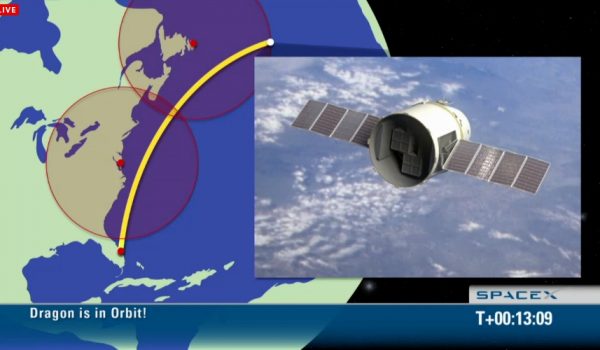 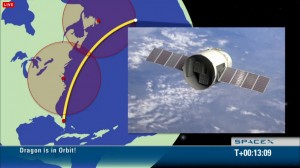 SpaceX’s Falcon 9 successfully made its third launch into space, carrying the Dragon capsule. All systems performed norminally, with the Dragon capsule boosted into orbit and deploying its solar panels as expected.

The launch, which took place at 3:44 EST on May 22 from Cape Canaveral, followed a last second abort on May 19. An investigation identified the cause of the automatic abort to stem from a faulty check valve on engine 5. The valve was replaced and all other systems rigorously reviewed in the intervening days. According to an earlier tweet from Musk, “Simulations show launch ok with bad valve. Still, better to stop & fix. Recalling rockets after launch is not an option.”

The earlier abort was clearly on everyone’s minds today. The more than 1800 people watching from SpaceX’s Hawthorne, California facility held their cheer until the orbiting Dragon capsule’s solar arrays deployed, while NASA’s commentator, who had been caught off-guard by the May 19 abort with 0.5 seconds left on the clock, took a measureable pause before declaring “liftoff” this time around.

The Dragon capsule is now scheduled for a busy testing schedule leading up to docking with the International Space Station on Friday, May 25. NASA astronaut Don Pettit will be in charge of grappling the capsule using the robotic Canadarm, assisted by ESA astronaut Andre Kuipers. Dragon will then deliver its cargo of non-essential supplies. If successful, the Dragon will become the first commercial spacecraft to dock with ISS.

Watch the launch below: