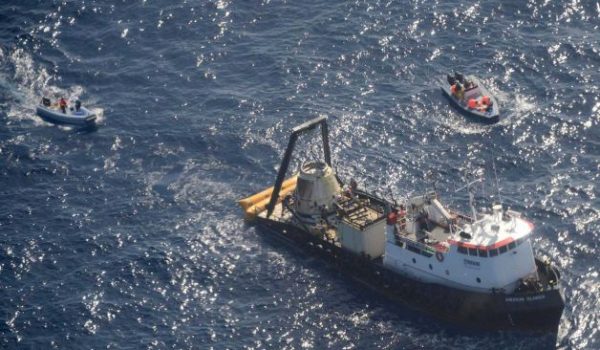 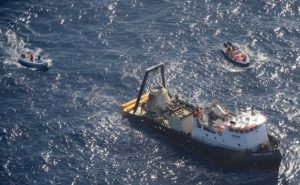 Dragon sails home after splashing down in the Pacific on October 28 (Credits: SpaceX).

After three weeks spent docked to the International Space Station, SpaceX’s Dragon cargo ship undocked the morning of October 28, splashing down in the Pacific Ocean six hours later. It was the conclusion of a successful first commercial resupply mission for both SpaceX and NASA.

Dragon is unique not just in that it is the first commercial vessel to supply ISS, but also in its ability to return supplies to Earth. This capability is lacking in existing resupply vessels ATV, HTV, and Progress, as well as Orbital Sciences’ in-the-works commercial supply vessel Cygnus. Since the end of NASA’s Space Shuttle program in July 2011, only small cargo able to fit in the cozy Soyuz capsule with returning spacefarers has made it off the station.

“Literally and figuratively, there is a piece of us on that spacecraft going home to Earth,” said Sunita Williams, referring to the more than a years worth of biological samples that departed with Dragon. “The ability to return frozen samples is a first for this flight and will be tremendously beneficial to the station’s research community,” NASA said in its release. “Not since the space shuttle have NASA and its international partners been able to return considerable amounts of research and samples for analysis.”

Following its reentry and parachute into the Pacific, Dragon was picked up by SpaceX’s barge for the trip to Long Beach, California. There, technicians will enter the craft to remove perishable samples for shipment to NASA before trucking the vessel to SpaceX’s McGregor, Texas facility for refurbishment following unloading of its remaining cargo.

While Dragon’s mission was a complete success, its Falcon 9 launch vehicle was less successful. The Falcon 9 that lofted the Dragon capsule into space on October 7 lost one of its nine engines in an “anomaly” that is still under investigation. The placement of a secondary payload, an Orbcomm prototype satellite, was sacrificed as a result and fell out of orbit within a few days. While NASA and SpaceX have formed a joint task force to investigate the issue, no word has been released as to their findings thus far. The next Dragon supply mission, currently scheduled for a January launch, may be delayed pending results of the investigation.

Watch below as Dragon departs the station: