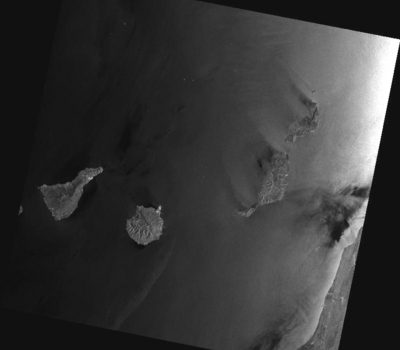 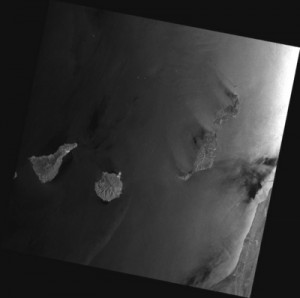 This advanced synthetic aperture radar (ASAR)image of the Canary Islands was the last image transmitted by Envisat on April 8 before it went silent (Credits: ESA).

ESA has declared Envisat’s mission over. The agency lost contact with the eight ton Earth observation satellite on April 8, 2012 and has failed to regain communications.

Envisat was originally intended for a 5 year service life as part of the European Global Monitoring for Environment and Security (GMES) initiative. It had reached the 10 year mark in 2012 and was expected to continue operating through at least 2013 when the replacement observation satellite Sentinel was due to launch.

Aside from the gap in environmental data that will result from the loss of the satellite, Envisat is expected to pose considerable space debris risk in its current sun synchronous polar orbit at an altitude of 782 km. Without communication capability, it is impossible to deorbit the bus-sized craft. Even if possible, it could be a hazardous endeavor, since large parts of the satellite would be likely to survive reentry.  It is expected that the satellite’s orbit will not decay for another 150 years. In its current location, Envisat poses a severe collision risk. In 2010, the satellite narrowly avoided a collision with a spent upper stage. If the collision had occurred, it was expected to produce ten times the debris caused by the infamous 2009 Iridium-Cosmos collision. Now without active control, such a collision would no longer be preventable.

Engineers have been unable to determine what caused the communication breakdown in a month of investigations. They will continue to attempt to establish contact, although the chance of recovery is considered to be low. Data from Envisat has been used in assessing sea ice, ocean levels, the ozone hole, plankton populations, droughts and other natural disasters, resulting in 2500 scientific publications over its lifetime.

The video below recounts some of Envisat’s successes in 10 years of operation: