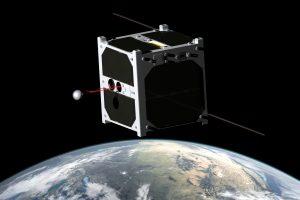 Image of ESTCube-1 operating its experiment (Credits: University of Tartu)

According to the United States Joint Space Operations Center (JSOC), ESTCube-1, the first Estonian satellite, is on a possible collision course with a space debris originated by the 2009 collision between Iridium 33 and Cosmos 2251.

ESTCube-1 is a nanosatellite developed as part of the Estonian Student Satellite Program and launched in low-Earth orbit aboard Vega rocket, on May 7, 2013. The closest contact between the cubesat and the debris is expected on August 2 at 04.40 UTC over the coastline of Antarctica. JSOC has estimated that the two objects will pass at about 200 meters from each other. ESTCube-1’s fate will be revealed only at 07:07 UTC when the satellite is scheduled to communicate with the ground station in Estonia.

Even if the collision hade been predicted for sure, no preventative measures would be possible because ESTCube-1 is without propulsive capability.

Collisions between nanosatellites and space debris are not so uncommon. Another cubesat, Pegaso, suffered a collision with space junk, on May 23. Pegaso, which was the first Ecuadorian satellite, was most likely hit by small particles surrounding a Tsyklon rocket body. Before that, the Russian retroreflector nanosatellite BLITS collided with a piece of Chinese anti-satellite test debris from Fengyun 1C, on January 22, 2013