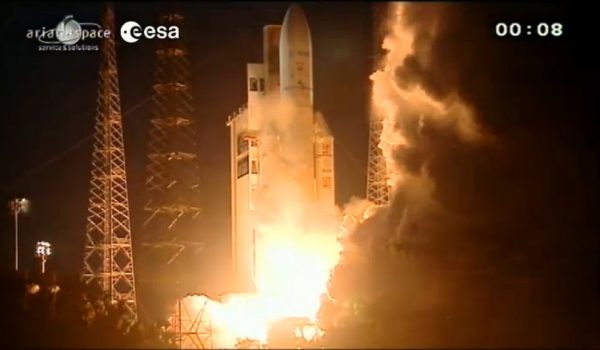 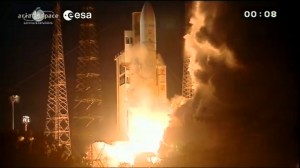 The European Space Agency’s (ESA) fourth Automated Transfer Vehicle (ATV) blasted off atop an Ariane 5 rocket from the Guyana Space Centre near Kourou, French Guiana, destined for the International Space Station (ISS), on June 5.  ATV-4, named after Albert Einstein, is expected to dock on the space station on June 15.

“Teams from ESA, CNES, Arianespace and Astrium have worked hard to ensure Albert Einstein is ready to go. I’d like to thank everyone for their dedication and professionalism,” said Alberto Novelli, ATV-4 Mission Manager.

The 52 meter tall Ariane 5 ES lifted off with ATV-4 just after sunset, at 21:52 GMT. After just over an hour, the spacecraft separated from the launcher and began a 10 day phase of health checks and orbital maneuvers. ATV-4, with an overall launch mass of 20,235 kg, is the heaviest spacecraft ever launched by ESA and it is carrying the largest dry cargo ever transported by an ATV. However, it is slightly less in terms of cargo mass than ATV-3 and ATV-2. The spacecraft will deliver over 1400 items including scientific equipment, spare parts and supplies, and it will also refuel the station’s tanks with 800 kg of additional propellant. The European cargo ship is also hosting items for NASA and JAXA. In addition, the Ariane made its first use of a new fairing separation system, which was designed to first separate the fairing horizontally, and then in an upward and lateral direction, all in under 1/10th of a second.

During its six-month stay attached to ISS, Albert Einstein’s thrusters will be used to increase the altitude of the Station, helping to counteract the atmospheric drag that can cause the station to lose up to 100 m of altitude per day. ATV can also move the ISS to avoid space debris and provide attitude control when other spacecraft approach the station. ATV-4 will also be used as an extra module by the astronauts and at the end of the mission in Autumn 2013, it will undock with several tons of waste onboard, to be deorbited in a controlled and destructive re-entry over the Pacific Ocean.

The launch, initially scheduled for April 2013, has been delayed due to a glitch in an avionics box. ATV-4 is scheduled to dock on the Zvezda’s aft docking port after the Progress M-19 M has departed the station. The departure will give the opportunity to verify the possible damage caused by a Progress’ stowed antenna at one of the three Laser Radar Reflectors that allow ATVs to approach autonomously to the station. In the event of complications with the Laser Radar Reflector replacement, ATV-4 can remain in free-flight for an additional 2 weeks pending the repairs.

Below, the making-of ATV-4 (Courtesy of ESA).