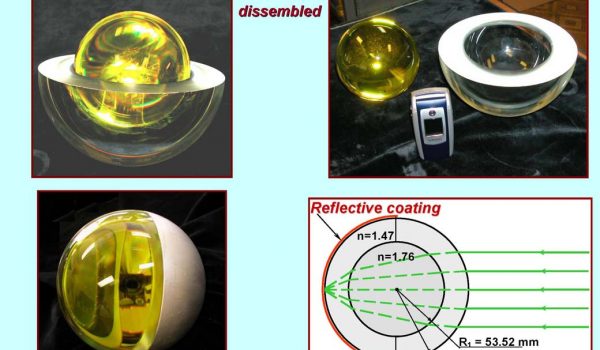 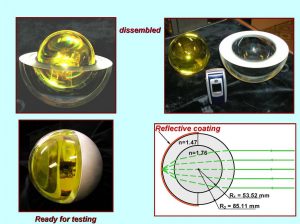 BLITS was composed of a high refractivity inner sphere and low refractivity outer sphere. It had an outer diameter of 17 cm (Credits: ILRS).

A release from AGI concludes that a change in orbit and spin period for the active Russian BLITS satellite reported on February 4 is due to collision with a piece of Chinese ASAT debris from Fengyun 1C.

The change was observed by Institute for Precision Instrument Engineering (IPIE) scientists Dr. Vasiliy Yurasov and Dr. Andrey Nazarenko. They recorded a sudden decrease in semi-major axis of 120 m and decrease in spin period from 5.6 seconds to 2.1 seconds. The scientists estimate that the change occurred on January 22 at 0308 UTC. Checking in with AGI’s Center for Space Standards & Innovation (CSSI), they found only one close approach that occurred near that time. A tracked piece of Fengyun 1C was expected to pass within 3.1 km of BLITS within 10 seconds of the observed trajectory change. Given the available data, CSSI technical program manager Dr. T.S. Kelso concluded that the two bodies must have been closer than anticipated. The Joint Space Operations Center (JSpOC) apparently agrees: it released the first two line elements (TLE) for BLITS debris on March 3.

Even if the collision had been predicted, no preventative measures would have been possible. BLITS is a passive nanosatellite without propulsive capability.

Fengyun 1C was a defunct Chinese satellite when China performed an anti-satellite (ASAT) test on January 11, 2007 that splintered the spacecraft into approximately 3000 pieces of orbital debris.

Below, a model of the Fengyun 1C and BLITS collision: