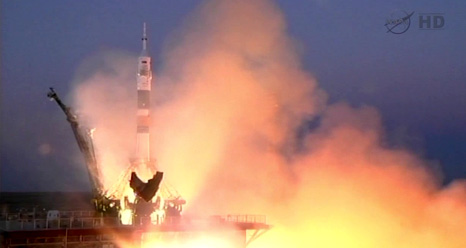 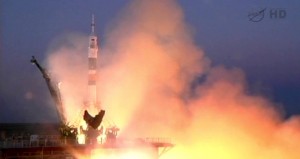 Soyuz TMA-07M takes off with its three crew members on December 19 (Credits: NASA).

At 6:12 PM Baikonour time (1212 GMT) on December 19, Expedition 34 Flight Engineers Tom Marshburn, Roman Romanenko, and Chris Hadfield launched aboard their Soyuz TMA-07M spacecraft from Kazakhstan. The launch went off without a hitch and the crew will spend the next two days travelling to the International Space Station, where their three crewmates – Commander Kevin Ford and Flight Engineers Oleg Novitskiy and Evgeny Tarelkin – await them.

“Everything is nominal onboard; we’re feeling well,” Romanenko, commanding the Soyuz, said through a translator just after launch. “We are feeling great.”

Although the crew are leaving home just before the Christmas holiday, they already have plans to deck out the station for their own orbital celebration. “We’ll be dressing up, we’ll be decorating the station, we’ll put up a Christmas tree, maybe we’ll have some presents that will arrive on the cargo vehicles, which of course will make us very happy and will support us during this evening, this special time,” said Romanenko.

All three crew members are space veterans. Marshburn brings extra experience as a NASA flight surgeon before he joined the astronaut corps in 2004. Marshburn also has significant EVA experience garnered while installing the Japanese Kibo laboratory, likely to come in handy for this expedition’s two upcoming spacewalks. “We have to be plumbers, electricians, construction engineers, or workers, on the space station, but at the same time running a laboratory, being scientists, being the best laboratory assistants we can be,” Marshburn told SPACE.com. “It’s all in a bundle; it’s very exciting, it’s a lot of fun.”

Hadfield, who helped install the Canadarm2 on his last trip, will end this trip as the first Canadian commander of ISS, a role he will take on at the beginning of Expedition 35 in March 2013.

The Soyuz was not the only launch on December 19. China launched a Turkish Earth oberservation satellite, Gokturk-2 aboard a Long March 2D launcher from Jiuquan Satellite Launch Center – the 19th Long March launch for 2012.  The European Space Agency also had a launch on December 19: the 7th Ariane 5 of 2012 took off from French Guiana carrying  telecommunication satellies Skynet-5D and Mexsat Bicentenario. Both launches were nominal.

Below, the Soyuz TMA-07M launch: