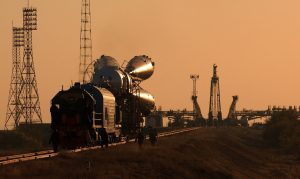 A Soyuz takes the train to the Baikonour launch pad (Credits: NASA).

On April 1, Russian and Kazakh officials announced that they had reached a compromise. On March 27, the two nations agreed that Russia would launch at least 14 commercial spaceflights from Baikonour Cosmodrome in 2013.

The agreement followed months of wrangling between the two nations over the status of Baikonour. Since the fall of the Soviet Union, Russia has paid Kazakhstan an annual rent of $115 million for use of the cosmodrome now on their territory. Kazakhstan first made rumblings about the pollution Russia was leaving in the area, then Russia declared that they wished to renegotiate the lease agreement to account for reduced launches – and payments – as they transition to the new  Vostochny Cosmodrome on Russian soil. The lease is scheduled to run through 2050.

Vostochny will not be complete until 2015, but Kazakhstan immediately struck back by limiting Russian access to Baikonour. As of January, Kazakhstan announced that Russia would be permitted to launch 12 flights from Baikonour – not including ISS related launches – for the year 2013 instead of the 17 Russia had requested. It has not been announced exactly how many flights Russia will now be permitted, but official statements indicate that it is at least as many as last year’s 14 launches. It is likely that Plesetsk Cosmodrome will pick up any slack; state satellite launch operations are already slated to transition to that domestic launch site while Vostochny is under construction.

So far this year, Russia has launched two satellites from Baikonour: Glostar-2 on February 6 and SatMex-8 on the Proton-M return to flight March 26. Two successful ISS flights have also taken off from Baikonour: the Progress M-18M supply vessel on February 11 and the Expedition 35/36 crew in the Soyuz TMA-08M on March 29.

Below, the most recent launch from Baikonour that put three crew members on ISS: