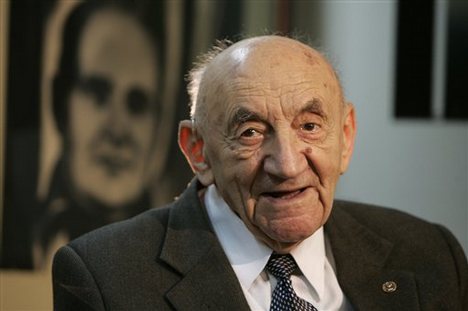 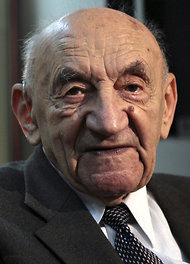 Boris Chertok, a Russian rocket engineer who played a pivotal role in designing navigation and control systems for the Soviet space program, including the rocket that launched the first ever artificial satellite into orbit, died in Moscow on Wednesday of pneumonia. He was 99.

“It’s difficult to think of any major event in the Soviet space program that he didn’t contribute to,” said Asif Siddiqi, a history professor at Fordham University. Chertok’s contributions to the Soviet space program first culminated in the launch of the R-7, the worlds first Intercontinental Ballistic Missile (ICBM) in 1957. The R-7’s cryogenic fuels prevented it from being deployed as an operational ICBM, as it required up to three hours of prelaunch fueling and preparations, making it tactically infeasible; however, later upgrades using storable propellants made it a viable weapon.

A modified R-7 was also used to launch Sputnik-1, the first artificial satellite to orbit the Earth. At the time of the launch, Chertok was serving as deputy to Sergei Pavlovich Korolev, widely regarded as the father of the Soviet space program. Chertok held his post for more than 20 years, and served as the primary designer of control systems for Vostok, Voskhod, and the hugely successful Soyuz vehicle.

While the Americans were conducting the first successful moon landing in 1969, which Chertok would later describe in his memoirs as a “personal defeat” for his country, a lunar probe developed by a Chertok-led team was orbiting the moon. A technical problem later caused the probe to crash into the lunar surface.

Until very recently, Chertok maintained an active life, driving to work and providing interviews to news agencies. Even at the age of 99, Chertok maintained his love for space travel, and reportedly continued to drive to work and provide lectures to students. When interviewed in 2001 about the flight of space tourist Dennis Tito, Chertok commented “I am a little bit under 90, and if someone presented me with $20 million I would gladly spend it on a ticket to space.”

Boris Chertok was born on March 1st, 1912, in Lodz, now owned by Poland. His family later moved to Moscow, where he became an electrician by the age of 17, was working in an aircraft factory by 18, and graduated from the Moscow Energy Institute in 1940. He became involved in the Soviet space program after World War II, bringing blueprints of the German V-2 missle back to Russia with Korolev, to be studied and used to develop Soviet missiles.

The video below shows a report from RT on the life of Boris Chertok.
[youtube http://www.youtube.com/watch?v=ljqDWUnKEJA]