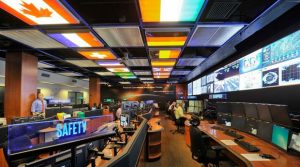 Now that the International Space Station has been fully operational for a couple years, the focal point of ISS has shifted from construction and operations to tackling the endless stream of science experiments – at least 200 running at any time – always waiting to be executed. Acknowledging the shift, NASA’s Marshall Space Flight Center has upgraded its Payload Operations Integration Center, designed specifically to accommodate researchers whose experiments are being run in orbit.

“When you guys see everybody’s eyes start to move away from Houston a little bit and start to focus on you, that’s because this is where it’s happening. Over one-third of the total crew hours on ISS are dedicated to research today,” said ISS manager Mike Suffredini at the Center’s dedication on June 19.

According to NASA, “the renovated room features a video wall that expands the ability to share information, such as live video, diagrams and photographs of experiments or displays on experiment power usage or scientific data acquisition. The wall instantly allows the data to be shared by the full team and has the capability to show multiple data and video views related to one or more experiments.”

The Payload Operations Integration Center has conducted 24/7 operations in the Huntsville, Alabama facility since 2001. It can also serve as a backup operational control room to Johnson Space Center’s Houton, Texas facility. The Control Center can be visited on the regular Marshall public tour.

Here is a quick look at the new Center: