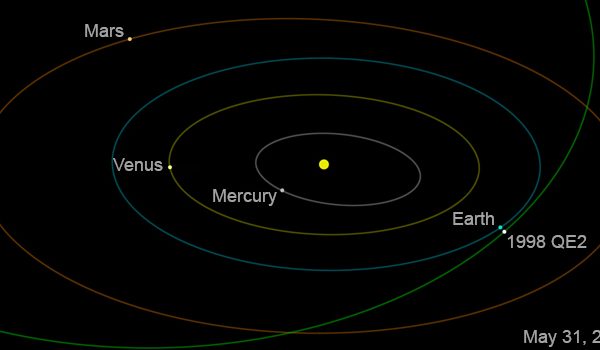 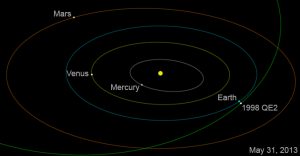 Asteroid 1998 QE2 is going to pass at about 5.8 million kilometers from Earth, which is about 15 times the distance between our planet and the Moon, on May 31. The distance is so huge that the object has never represented a threat to the planet, but the asteroid will be studied in detail thanks to radar telescopes of the NASA Deep Space Network (DSN).

“Asteroid 1998 QE2 will be an outstanding radar imaging target at Goldstone and Arecibo and we expect to obtain a series of high-resolution images that could reveal a wealth of surface features,” said the principal investigator for the Goldstone radar observations, Lance Benner, from NASA’s Jet Propulsion Laboratory.

Asteroid 1998 QE2 is estimated to be about 2.7 km in diameter, but the observations will guarantee to provide a better estimation of its size and rotation. According to Benner, the passage will also give the opportunity to use new radar measurements and improve calculation of the propagation of its orbit into the future. The asteroid, discovered in 1998, is going to make its closest approach to Earth for at least the news two centuries, on May 31. The designation was given by the Minor Planet Center, which operates at the Smithsonian Astrophysical Observatory in Cambridge, Massachusetts, and gives to each newly discovered asteroid a provisional code. The Minor Planet Center works under the auspices of the International Astronomical Union to collect maintain and distribute orbital data about asteroids and comets.

The observations on 1998 QE2 will be carried out using the 70-meter-wide Goldstone antenna, part of the DSN, and the Arecibo Observatory in Puerto Rico. The two telescopes have complementary imaging capability that will give radar astronomers the opportunity to learn as much as possible about the space rock. Goldstone antenna’s radar images could be used to observe 4-meter wide asteroids, over 6 million  kilometers away, transforming what optical telescopes see as a mere “point of light” in the sky, into an object with its own unique set of characteristics.

The Slooh robotic telescope as well as as well as the Virtual Telescope of the astrophysicist Gianluca Masi will have webcasts on the asteroid approach on May 31, starting 8.30 PM GMT.

Below, Lance Bennet talks about Asteroid 1998 QE2 (Courtesy by NASA).