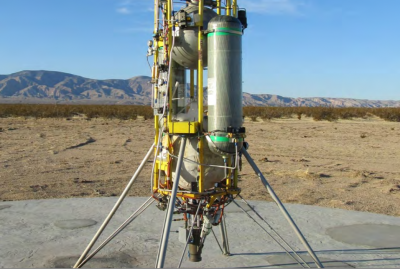 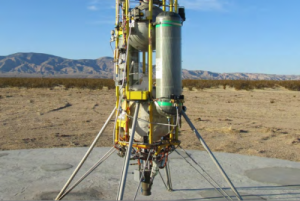 The test was conducted at the Mojave Air and Space Port, in California to simulate Martian and Lunar landing trajectories. Xombie is a fully reusable vertical takeoff and vertical landing launch vehicle, which is used for low speed and low altitude testing. It is powered by a single engine capable of outputting 3 kN of thrust. Xombie is equipped with a hypervisor enabling third party software to control the vehicle in flight while Masten maintains the guidance, navigation and control supervision. The vehicle won $150,000 as second prize in the level one Northrop Grumman Lunar Lander Challenge X Prize. Another Masten vehicle, Xoie, won the $1 million first prize in the level two competition. Xombie has recently been used by Draper Laboratory as a landing systems test platform for NASA Jet Propulsion Laboratory. During the Draper tests, Masten performed the second set of tests with the GENIE system on Xombie. GENIE, short for Guidance Embedded Navigator Integration Environment, was designed by Draper Laboratories to demonstrate planetary precision landing, autonomous guidance, navigation and control, all of which are fundamental technologies needed for future planetary and asteroid missions.

Masten’s test campaign in Mojave Air and Space Port will continue through all March, consisting in 2 flights, targeting an increasing altitude and downrange distance.