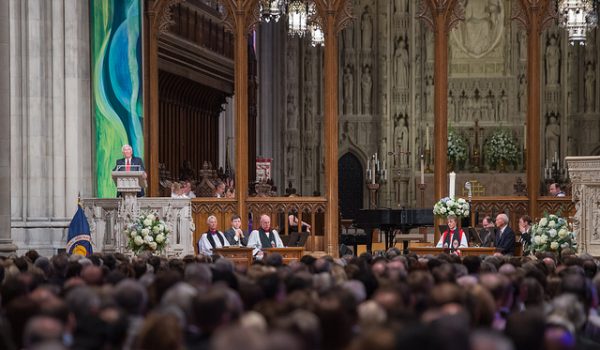 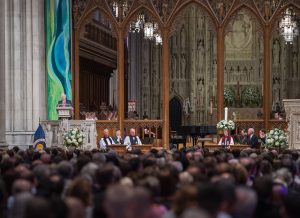 Hundreds gathered at the National Cathedral in Washington D.C. on September 13 to honor the passing of Neil Armstrong.

The timing of the memorial was poignant, one day after the 50 year anniversary of President John F. Kennedy’s Rice University speech in which he famously proclaimed “We go to the Moon in this decade and do the other things, not because they are easy but because they are hard.” Armstrong’s first human step on the Moon fulfilled the vision of that speech.

Throughout the memorial, Armstrong was remembered as the humblest of people, a team player who always gave others credit before himself. “Neil will always be remembered for taking humankind’s first small step on another world,” said NASA Administrator Charles Bolden. “But it was the courage, grace, and humility he displayed throughout his life that lifted him above the stars.” Astronaut Eugene Cernan, the last man to set foot on the Moon, paid tribute to his friend: “No one, but no one, no one would have accepted the responsibility of his remarkable accomplishment with more dignity and more grace than Neil Armstrong. He embodied all that is good and all that is great about America.”

Attendees at the function, which had a limited public attendance, included current and former astronauts, NASA administrator Charles Bolden, former Secretary of the Treasury John Snow, and former Secretary of the Navy John Dalton among other distinguished guests. Prayers were led by Apollo 11 Command Module pilot Michael Collins, while jazz singer and pianist Diana Krall performed Frank Sinatra’s song Fly Me to the Moon. Bolden presented Armstrong’s widow Carol Armstrong with the flag that was flown at half mast over Johnson Space Center Mission Control the day her husband died. 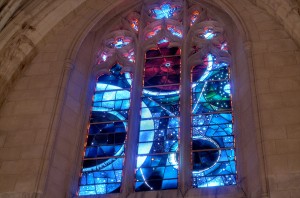 The Space Window at the National Cathedral. The bubble in the center of the red “planet” holds the Moon rock presented to the Cathedral by Armstrong and his crewmates in 1974 (Credits: David Grant).

The memorial was conducted in the light of the National Cathedral’s “Space Window,” a stained glass window depicting a swirl of planets and encasing a Moon rock. The rock was presented to the Cathedral on the fifth anniversary of the first step on the Moon by Apollo 11 crew Neil Armstrong, Buzz Aldrin, and Michael Collins.

Neil Armstrong died on August 25 at the age of 82 of complications following heart surgery. He was remembered in a private family service on August 31 and will be buried at sea on September 14, ending life as the Navy man he always was.

Below, NASA’s tribute to Neil Armstrong: