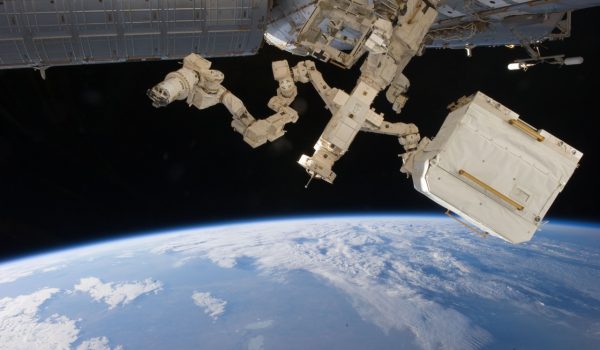 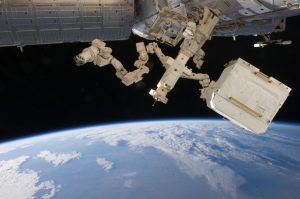 The new Canadian space robot Dextre has completed successfully its first week of activities on board the ISS. The Special Purpose Dextrous Manipulator (SPDM), better known as Dextre, was designed and built by MacDonald Dettwiler and Associates, (MDA), and financed by the Canadian Space Agency (CSA).

Dextre  resembles a sort of headless torso, 3.5 meters long, equipped with several tools, lights, TV cameras and a couple of arms, each one 3.15 meters long with 7 degrees of freedom . Designed to be grappled by Canadarm2, it can be positioned at the various compatible Orbit Replaceable Units (ORUs) around the space station, where it can perform repairs, operate scientific payloads and support human EVA. According to the Canadian Space Agency, the robot, which is controlled entirely from the ground, is able to perform precision maneuvers as small as 2mm.

Launched in March 2008 on board STS-123, the robot has suffered a somewhat troubled deployment. Between 2009 and 2011, the device received several software upgrades and underwent calibration, testing and qualification.

On August 28 and 29, 2011, Dextre performed its first repair, by replacing a failed circuit breaker box. Perched at one end of Canadarm2, Dextre used one of its hands to remove a faulty circuit breaker from the ISS, and replaced it with a brand new one collected with its second hand from the Cargo Transport Container located on his workbench. On September 2, Dextre has been used to unpack two critical pieces of equipment delivered by Japan’s HTV-2 spacecraft. The operation, which required dexterous operations such as bolting and fastening, was performed remotely by controllers at NASA’s Johnson Space Center in Houston while the crew was sleeping.

Dextre has been designed to perform standard repairs on the ISS exterior and to test satellite servicing tools and techniques, reducing the need for human EVAs, saving cost, reducing the risk and freeing up the crew for science experiments.