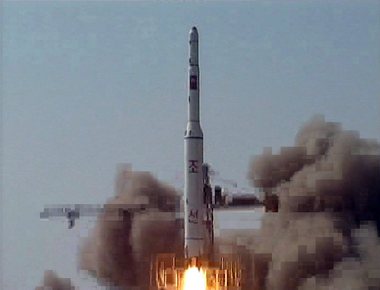 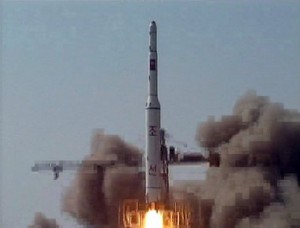 The highly scrutinized North Korean rocket launch of Unha-3 failed on April 12 when the first stage failed to separate. Debris from the launch fell off of South Korea’s coast.

NORAD tracked the launch and reported in a statement that they “detected and tracked a launch of the North Korean Taepodong-2 missile. At no time were the missile or the resultant debris a threat.” South Korea’s defence ministry issued a statement that “North Korea’s rocket flew about one or two minutes before it exploded mid-air.” The rocket reached an altitude of 151 km before falling into the Yellow Sea, about 100-150 km from the South Korean city of Pyeongtaek.

The launch attempt brought widespread international condemnation, with many nations suspicious that the launch was a ballistic missile test in violation of the UN ban, despite North Korea’s claim that the rocket was hoisting a remote sensing satellite into orbit. “Even if it was a failure, it is a grave provocation to our country and other countries concerned and violates UN Security Council resolutions,” said Japanese Chief Cabinet Secretary Osamu Fujimura. South Korean Foreign Minister Kim Sung-Hwan agreed: “It is a provocative act threatening peace and security,” he said.  “North Korea is only further isolating itself by engaging in provocative acts, and is wasting its money on weapons and propaganda displays while the North Korean people go hungry,” contributed US White House spokesman Jay Carney.

Over 200 international journalists were invited to witness the launch from Pyongyang.  The launch was timed to coincide with the  centenary anniversary of it founder’s, Kim-Il Sung’s, birth.

It is not clear what North Korea plans to do next or whether there will be a second attempt at the launch. Officials originally indicated a statement would be issued at 00:00 GMT, but such a statement has yet to appear. The UN Security Council will hold an emergency session on April 13 to consider North Korea’s actions.

Below is an animation of the failed launch: